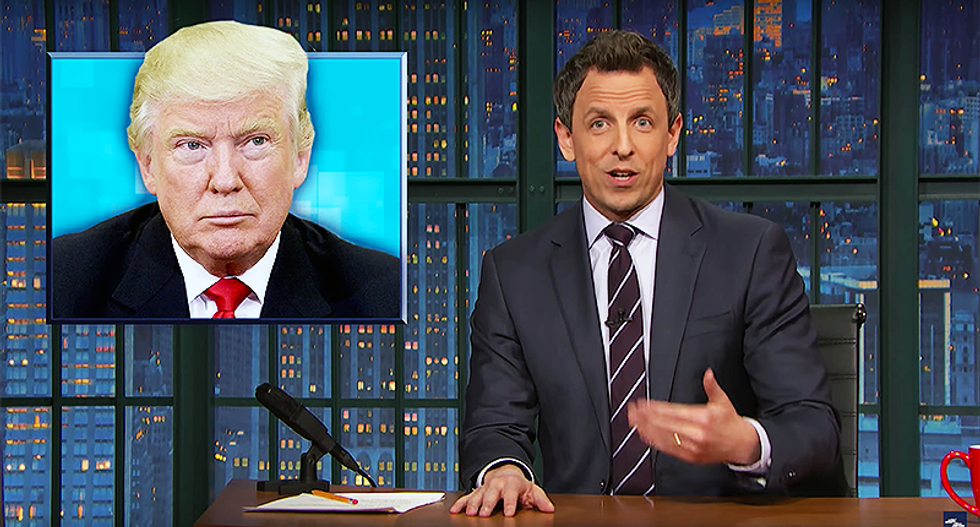 President-elect Donald Trump making news this week for tweeting attacks on former President Bill Clinton while international attacks and terrorism were plaguing the world. "Late Night" host Seth Meyers remarked that this is about to be the most tweet-filled presidency in history, whether Americans want it to be or not.

"Basically Donald Trump's Twitter feed will serve as his version of FDR's fireside chats," Meyers noted. But only if FDR said things like, "the only thing we have to fear is fear itself and Mexicans." Last week, Stephen Colbert noted they'd be more like toiletside chats.

Meyers noted that we're about to enter a dangerous era where the leader of the free world will have the ability to bypass traditional media and fact checkers to "spread lies and conspiracy theories unfiltered through his Twitter account."

"For example," Meyers began. "The incoming Chief of Staff Reince Priebus recently suggests that Trump might completely scrap the traditional daily press briefings the White House does with reporters."

Priebus told one radio host that there are traditions that the administration will keep but most of the time things like press briefings don't make news and are boring.

"Boring episodes?" Meyers was shocked. "This country needs boring episodes right now. The last 18 months have been so insane, it's like a season of 'Game of Thrones' where every episode is 'The Battle of the Bastards.' We all need a break from this action. I can't believe I'm saying this, but America needs some Bran."

To add to the problem, Trump hasn't had a press conference in 146 days, closing in on the record he criticized Clinton for holding. It forces the media to focus on his Twitter account for the sole source of information.

"Like this weekend when China seized the U.S. naval drone in international waters and Trump tweeted quote, "China steals United States Navy research drone in international waters. Rips it out of water and takes it to China in unprecedented act,'" Meyers cited. "But drawing as much attention as his 'shoot from the hip' foreign policy was his apparent inability to spell because the original tweet said it was an 'unpresidented' act. 'Unpresidented' is not a word of course, but it would be a great title for a movie about Hillary Clinton. She was inevitable until she became 'unpresidented.'"

Meyers explained he isn't criticizing someone for being bad at spelling and admitted he's bad at spelling, however he pays attention when Twitter tells him that he spelled something wrong. Conservatives blame Obama for ignoring the red line in Syria but Trump ignores it on Twitter.

That said, in the post-truth era of American news and politics, misspellings aren't even wrong anymore. Even Trump spokesperson Kellyanne Conway noted, "While liberals focus on spelling, Donald Trump is focused on the American people and their problems."

"But again, and this is important," Meyers qualified. "Spelling is only a distraction. We are not all going to die because Donald Trump can't spell. Unless he accidentally starts a nuclear war with an email like this to Vladimir Putin: I'll have my people kill your people."

China ultimately gave the drone back and Trump's team took credit for the victorious tweet, ignoring the diplomatic protest from President Obama. Trump's communications director tweeted, "Donald Trump gets it done China says it will return U.S. drone it seized."

"Yeah that's right," Meyers claimed. "Trump got China to give the drone back. Although, I'm not sure trump knows that, because a few hours later he tweeted, 'We should tell China that we don't want the drone they stole back. Let them keep it.'"

Trump has been known to lash out at news outlets on Twitter as well. The most recent example was Vanity Fair, which significantly increased their subscriptions after Trump blasted a bad food review of his new DC hotel restaurant.

Oddly enough, when Trump had a meeting with tech giants from Silicon Valley last week, he excluded the heads of Twitter. Meyers remarked it was absurd given it is his main form of communication.

"Twitter's exclusion was not an accident," he said. "In fact, it was apparently done out of revenge as Politico reported, 'Twitter was told it was bounced from Wednesday's meeting between tech executives and Trump. In retribution for refusing during the campaign to allow an emoji version of the hash tag #CrookedHillary. Although to be fair, Twitter does have an emoji for Trump's Presidency." Meyers then flashed the emoji if a smiling pile of excrement.