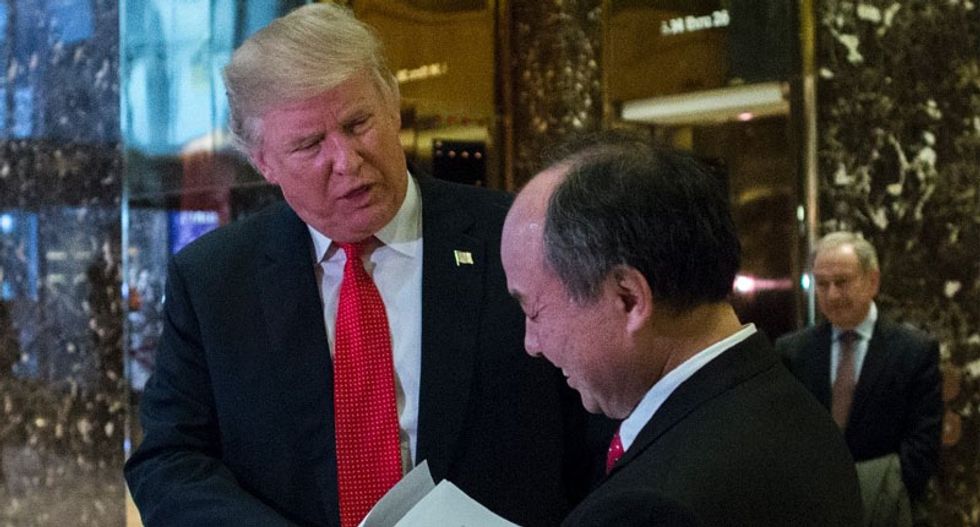 Satellite broadband firm OneWeb on Monday announced a $1.2 billion funding round led by SoftBank, the first concrete investment from the Japanese group which made a pledge to President-elect Donald Trump.

SoftBank, which is providing $1 billion of the funding for the project aimed at providing global internet access via satellite, made the announcement just two weeks after its chief executive Masayoshi Son met Trump and pledged to invest $50 billion in the US economy and create 50,000 jobs.

"Earlier this month I met with President-elect Trump and shared my commitment to investing and creating jobs in the US," Son said in a statement.

"This is the first step in that commitment."

About 3,000 new jobs are expected to be created in engineering, manufacturing and support in the US over the next four years as a result of the investment, the companies said.

The announcement suggests a path to delivering high-speed internet via satellite after several failed efforts in recent years.

The funding will help support a new facility capable of producing 15 satellites per week "at a fraction of the cost of what any satellite manufacturing facility in the world can produce today," a statement from the groups said.

Production will start in 2018, the companies said.

OneWeb, which has previously raised funds from British tycoon Richard Branson and whose partners include Airbus, Qualcomm and Intelsat, aims to offer satellite broadband to underserved parts of the world.

The investment will also support a program "to provide global access to affordable high-speed internet services for everyone, including every unconnected school in the world by 2022," said the statement.

OneWeb intends to launch 684 low-orbit satellites, to cover the entire planet and deliver internet to areas where conventional land systems are not economical.

The idea dates back to the 1990s, when Teledesic, a project backed by Microsoft's Bill Gates and Saudi royal family investors, died before it went into service. Another venture called SkyBridge, also failed, and its assets were eventually acquired by OneWeb.

Backers of the idea and an equally ambitious plan being developed by Elon Musk's SpaceX argue that improved technology and lower production costs can make space-based systems more feasible than in the past.