‘Stop doing that!’: RNC spokesman freaks out when asked why he doesn't trust the CIA on Russian hacks 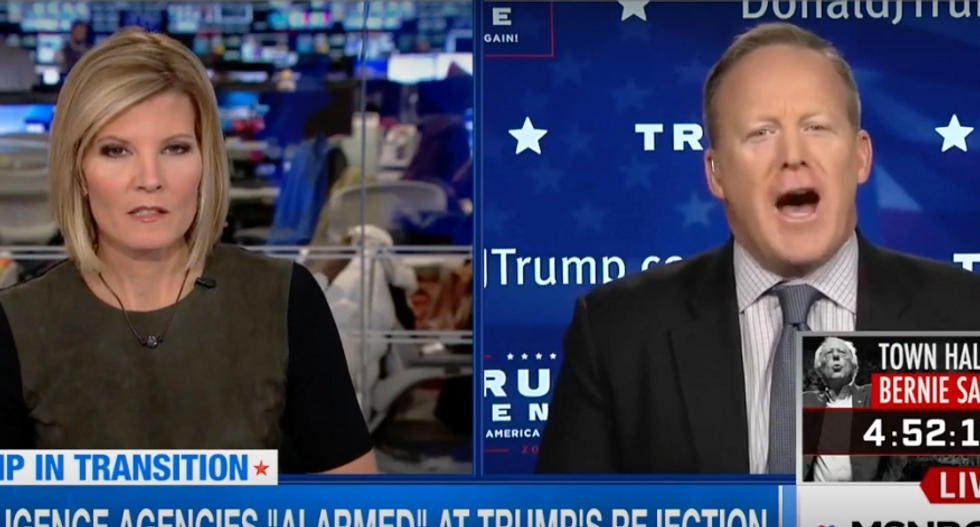 Spicer argued the evidence that the Kremlin wanted to tip the scales for the president-elect is “based on the fact that the RNC was hacked, and it was not hacked,” referring to a New York Times article Friday alleging Republican political operatives also had information stolen but conspicuously not released.

“That does call into question the intelligence and the conclusions they came to,” Spicer argued.

Snow asked if Spicer was saying he doesn’t trust the CIA, at which point the conversation devolved into a dramatic back-and-forth between the two:

Spicer: Stop doing that! That’s not what I said, no! You keep—

Snow: I’m just asking a question. Are you saying you don’t trust the CIA? Because just a moment ago you said three letter agencies with unnamed sources, that’s why I’m asking. Do you not trust—

Spicer: No, no. Tell me someone in the CIA, give me a name, publish a report and we’ll deal with it. Right now, you guys start saying that you read these reports, you have no name behind it.

Snow explained that her sources confirmed the CIA believes with “a high degree of confidence” that Russia attempted to help Trump with the election. “I’m asking, do you not believe that?” Snow asked.

“Can I answer the question?” Spicer snapped back, insisting all the sources had concluded a pro-Trump Russian motive “based in part on the fact that the RNC was hacked.”

"They’ve now walked that back in the course of the last 48 hours,” Spicer continued. “So my point to you is this: the facts that we were initially presented with are clearly not accurate and so it does call into question [the legitimacy of those reports]."

“And I find it interesting that you guys aren’t asking them to provide further proof of this,” he added.

Snow replied that “of course” news organizations are asking for further proof of Russian interference. Spicer remarked that the networks must not be doing a good job.