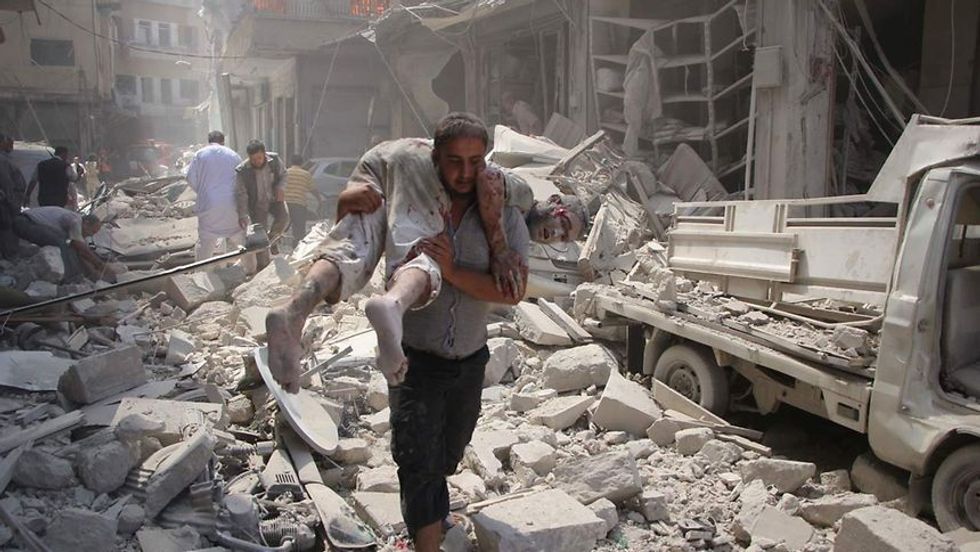 A Syrian man carries a victim following a reported air strike on the rebel-held northwestern city of Idlib on September 10, 2016 (Photo: AFP)

Syrian pro-government forces have reportedly executed dozens of civilians in Aleppo including women and children, the UN said Tuesday as the crucial battle for the city neared its end.

UN rights office spokesman Rupert Colville said forces loyal to President Bashar al-Assad had in some cases entered homes and killed those inside, and in others "caught and killed on the spot" fleeing civilians.

Fears have been growing for thousands of trapped civilians as rebels make a desperate last stand in their remaining pocket of territory in the former opposition stronghold of east Aleppo.

After weeks of heavy fighting, regime forces were poised to take full control of Aleppo, dealing the biggest blow to Syria's rebellion in more than five years of civil war.

Speaking to reporters in Geneva, Colville said the UN had received credible reports that at least 82 civilians, including 11 women and 13 children, had been killed in recent days.

Colville said the UN was "filled with the deepest foreboding for those who remain in this last hellish corner of opposition-held eastern Aleppo."

Residents in remaining rebel-held territory told AFP they had no hope left.

"Our fate is sealed. Why would we hide, it won't do us any good. We will either die or be captured," said Ibrahim Abu al-Leith, a spokesman for the White Helmets rescue service.

Other witnesses described scenes of carnage in rebel areas, with bodies lying amid the rubble of city streets, as desperate residents sat on pavements with nowhere to shelter.

"There are dozens of bodies in the streets because of the intense bombardment by regime forces," Rami Abdel Rahman of the Syrian Observatory for Human Rights told AFP.

Abdel Rahman, whose Britain-based group has for years monitored the conflict in Syria, said he was unable to confirm the reports of civilians being executed or other alleged massacres.

But UN chief Ban Ki-moon had in a statement late Monday expressed alarm "over reports of atrocities against a large number of civilians, including women and children".

French Foreign Minister Jean-Marc Ayrault said there were worrying reports from Aleppo of "cold-blooded killings of entire families", "summary executions, including of women and children" and "people burned alive in their homes".

"Such atrocities are unconscionable. Supporters of the regime, starting with Russia, cannot let this happen."

Syria's army has taken more than 90 percent of the territory once held by rebels in east Aleppo, after launching an all-out offensive last month to seize control of the entire city.

Aleppo, a cultural and economic hub in northern Syria second only to Damascus in importance, had been split between a rebel-controlled east and government-held west since 2012.

Recapturing all of Aleppo will be a huge victory for Assad and leave his regime in control of all five of Syria's main cities.

As of early Tuesday, rebel fighters were reported to be confined to just a handful of neighbourhoods, including Mashhad and part of Sukkari.

It was unclear how many civilians remained in rebel territory, after an estimated 130,000 fled to other parts of Aleppo during the government advance.

Jan Egeland, head of the UN-backed humanitarian taskforce for Syria, told AFP that thousands of civilians were in need of evacuation and safe passage, including hundreds of wounded.

"Our appeal to Russia and to the Syrian government is very clear: we need a pause in the fighting but we also need to get the people inside to help organise an evacuation," he said.

The International Committee of the Red Cross said there was only a "last chance to save lives" in Aleppo.

"As the battle reaches new peaks and the area is plunged into chaos, thousands with no part in the violence have literally nowhere safe to run," it said.

The government assault has been backed by heavy artillery fire and air strikes, with at least 463 civilians, including 62 children, killed in east Aleppo since mid-November, according to the Observatory.

Another 130 people including 40 children have been killed in western districts by rebel rocket fire.

Diplomatic efforts to end the conflict have repeatedly failed, and weekend talks between Russia and the United States on a ceasefire to allow the evacuation of civilians made no breakthrough.

Moscow is a key Assad ally and launched an air war in support of his forces last year, while Washington and other Western nations have backed the opposition.

Turkey, which has also supported rebel forces in Syria, said Tuesday it would intensify talks with Russia on a ceasefire.

"Today, tomorrow, everyday, we will intensify our talks with Russia and other countries so we can find a solution to this humanitarian tragedy," Turkish Foreign Minister Mevlut Cavusoglu said.

"Our efforts continue in particular for civilians to be able to leave and for a ceasefire."

More than 310,000 people have been killed since the Syrian conflict began in March 2011, and over half the population has been displaced, with millions becoming refugees.