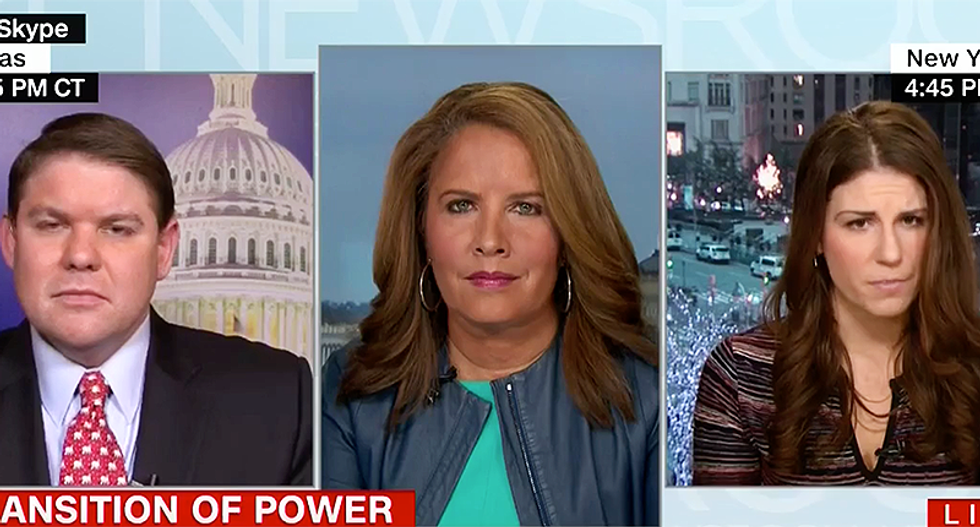 "My personal hope is that there will be a congressional probe and I think that we need to treat the story with intense skepticism," Duca began. "That said, for any American leader Russian interference with the bedrock of our democracy should be unacceptable and the cavalier way with which he dismissed the allegations based on his own assumptions is upsetting to me and I think should be upsetting to the American people regardless of what side you're on."

Duca refused to speculate on whether Russia interfered enough to impact the election and instead focused on the concerning fact that a foreign power hacked the United States.

She went on to say that she thinks Trump's praise of Russian President Vladimir Putin complicates the issue even further. While Trump's advisor Kellyanne Conway claimed that President Barack Obama was trying to paint Trump in a box, it's Trump that seems to be painting himself into that box.

"Then also the proposed idea that he is the beneficiary of their interference sort of calls into question his rejection of this," Duca alleged. "The CIA works for the American people and Trump is about to work for the American people. We could sit here and talk about whether that's the reason Hillary lost or what Obama has done wrong, but regardless this is something that Donald Trump and his team should be taking extremely, extremely seriously."

Ferguson explained that Trump is merely being skeptical of the information coming out of the CIA. Trump, so far, has refused to take an intelligence briefing that would outline the information and evidence for him. Until recently, Trump refused to take the briefings on global security, but now takes the daily briefing three times each week. The transition team has claimed that Trump will finally take a briefing on the CIA's report sometime next week. Until then, Trump has been praising Putin on Twitter.

Ferguson maintained that there is no evidence to back up the claim that the Russian hack was to impact the U.S. election. Ferguson, however, is not privy to classified CIA, FBI or DHS intelligence nor is he eligible for an intelligence briefing.

Duca blamed Trump for attempting to undermine the CIA and its report by claiming the CIA was wrong about weapons of mass destruction in Iraq. Trump's advisors have been on news shows building a case against the CIA even citing such failures as the Bay of Pigs invasion in the 1950s. Ferguson claimed that these questions don't undermine the CIA.

Ferguson took a condescending tone and attempted to explain that we had to look at Trump's tweets in context and that she and everyone else didn't understand what Trump was trying to say.

"It seems to me that it's based in a mode of self-preservation that we're even seeing the tweet we just showed of the idea of enemies, of people who are against Donald Trump," Duca said. "I think he needs to reorient himself to realize he is now going to be working for the American people, the CIA works for the American people and this is not about winners and losers any longer."