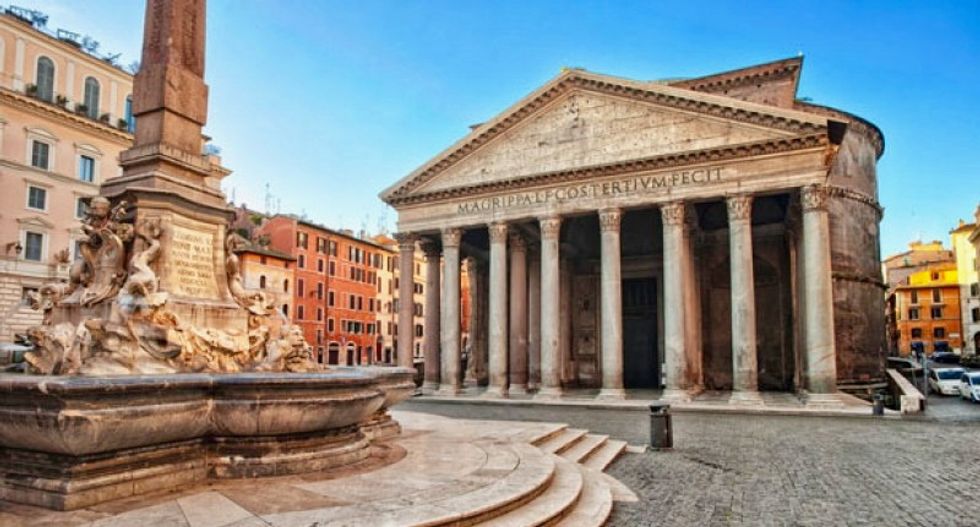 The Pantheon in Rome

In the Doctor Who Christmas Special from 2010, Michael Gambon’s Scrooge-like character remarks that across different cultures and worlds people come together to mark the midpoint of winter. It is, he imagines, as if they are saying: “Well done, everyone! We’re halfway out of the dark!”

The actual reasons for celebrating Christmas at this particular time in the year have long been debated. Links have often been drawn to the winter solstice and the Roman festival of Saturnalia. Some people have also associated it with the supposed birthday of the god Sol Invictus, the “unconquered sun”, since a fourth-century calendar describes both this and Christ’s birth as taking place on December 25.

Such speculation has inevitably led to claims that this traditionally Christian festival is little more than a rebranding of earlier pagan activities. But questions about the “religious identity” of public celebrations are, in fact, nothing new and were being asked in the later periods of the Roman empire as well.

This is particularly evident in the case of a rather obscure Roman festival called the Brumalia, which started on November 24 and lasted for 24 days. We cannot be sure exactly when it began to be celebrated, but one of our best accounts of it comes from the sixth century AD. A retired public official called John the Lydian explained that it had its origins in earlier pagan rites from this time of year, including Saturnalia.

Some people celebrated Brumalia by sacrificing goats and pigs, while devotees of the god Dionysus inflated goat skins and then jumped on them. We also believe that each day of the festival was assigned a different letter of the Greek alphabet, starting with alpha (α) on November 24 and finishing with omega (ω) on December 17.

A person would wait until the day that corresponded to the first letter of their own name and then throw a party. This meant that those with a

wide circle of friends – and, in particular, friends with a wide variety of names – might potentially get to go to 24 consecutive celebrations. 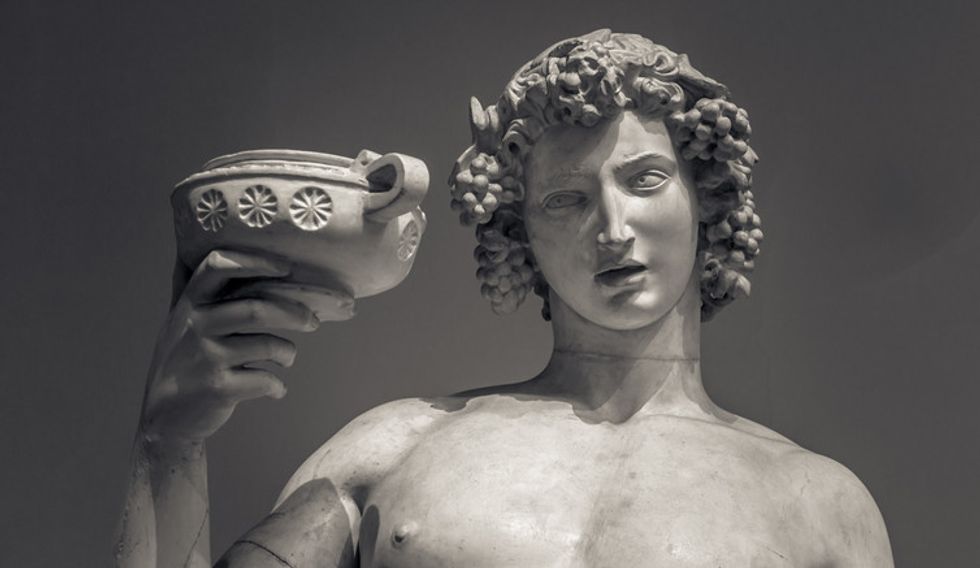 We also have other evidence for the popularity of the Brumalia during the sixth century. A speech by the orator Choricius of Gaza praises the festivities laid on by the emperor Justinian (527–565), remarking that the emperor and his wife, Theodora, celebrated the Brumalia on adjacent days, since the letter iota (ι) – for Justinian – directly follows theta (θ) – for Theodora – in the Greek alphabet. Surviving accounts from the cellars of a large estate in Egypt also detail the wine distributions to officials and servants for the Brumalia of the master, Apion, which fell on the first day of the festival.

Yet, the origins of the Brumalia are far from clear. It seems to have been related to the earlier Roman Bruma festival, which took place on a single day in November and looked ahead to the winter solstice (or bruma in Latin) a month later, but little is known about this.

It is only really from the sixth century onwards that it appears in surviving sources, even though by then most Romans were Christians and had been ruled by Christian emperors for more than two centuries. John the Lydian also states that the “name day” aspect of the celebrations was a recent innovation at this time. As far as we can tell, therefore, this was not merely a remnant from a distant pagan past, but had actually developed and grown at precisely the same time as emperors, including Justinian, were endeavouring to clamp down on perceived “paganism” in their empire.

The historian Roberta Mazza, in one of the most comprehensive modern discussions of the festival, has argued that the Brumalia was simply too popular to get rid of entirely, but that Justinian sought to strip it of “pagan” elements. She says that in doing so, the emperor “reshaped and reinvented the meanings and purposes of the feast” and made it “both acceptable from a religious point of view and useful for constructing a common cultural identity throughout the different provinces of the empire”.

The true meaning of Brumalia

We know that the Brumalia continued to be celebrated at the imperial court in Constantinople until at least the tenth century, but it was certainly not without its opponents. John the Lydian reports that the church was opposed to the Brumalia, and similar statements of disapproval and attempts to ban it were also made by church councils in 692 and 743. For some Christians, it remained just too pagan for comfort. Controversy also surrounded other celebrations in late antiquity, including the wearing of masks at New Year, the Roman Lupercalia (with its naked runners), and the processions and dancing involved in the “Bean Festival” at Calama in North Africa.

How then should we view the Brumalia? Was it still essentially “pagan”, or had it become safely Christianised or secularised? I think that any attempt to neatly categorise these festivals, let alone their participants, is destined to fail. For some people, the religious elements will have loomed larger, while for others they will have been almost entirely irrelevant, as also happens with Christmas today.

The Brumalia could be celebrated in a variety of ways and have a multitude of meanings to different people throughout the empire, even if all of them saw themselves as Christians. Rather than arguing that Justinian or others who enjoyed the Brumalia were “less Christian” than its opponents, we might instead treat it as a vivid illustration of the fluidity and malleability of notions of culture and identity.

We cannot ever discover the true meaning of Brumalia, but we can be sure that it brought people together to commemorate being halfway out of the dark.