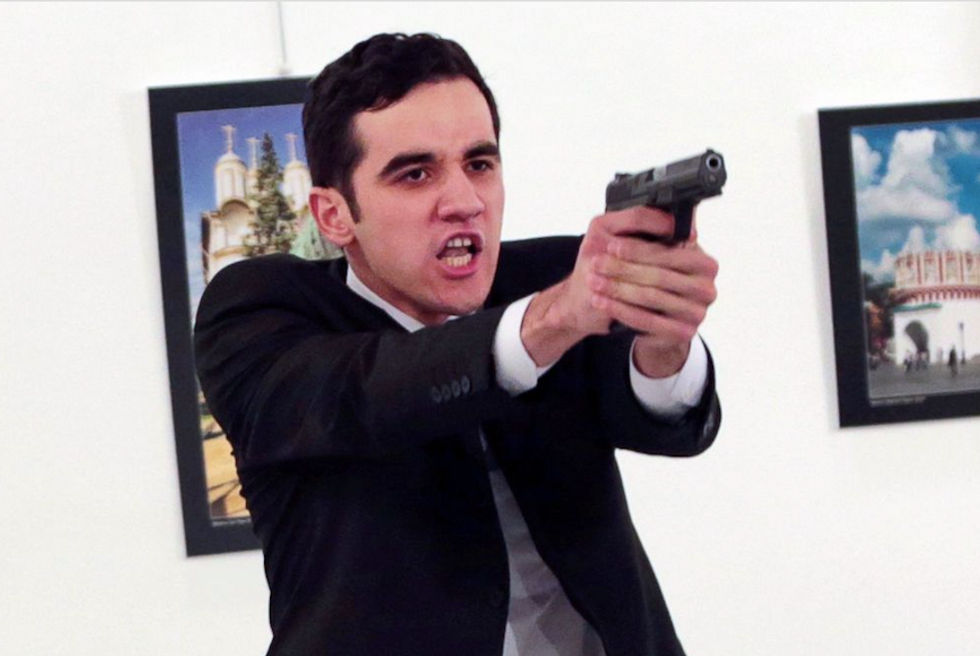 Mevlut Mert Altintas, 22, had been a Turkish police officer in the capital Ankara all his working life.

On a freezing winter evening on Monday, he walked out of room number 214 in a hotel in the Cankaya district of the city after shaving and putting on a suit.

The hotel room had been booked on December 14 and he had checked in on Sunday.

Carrying a total of 75 bullets in three magazines and also in his pockets, Altintas made his way to the Contemporary Arts Centre exhibition hall in Ankara, just metres from his hotel.

He did not go through the metal detector security check. After being told to do so he flashed his police ID and was waved through.

As Russian ambassador to Ankara Andrei Karlov was giving the opening speech to inaugurate a photo exhibition of Russian landscapes, Altintas lurked behind, away from the other vernissage guests, listening attentively.

Police later entered the exhibition centre and after a 15-minute shootout, Altintas was fatally shot at 7:42 pm.

What prompted a young policeman with no previous criminal record to commit a crime that, whatever its consequences, will forever be remembered in history?

Altintas hailed from the quiet town of Soke in Aydin province in western Turkey where he went to school.

"He was a pleasant, cheerful boy. He caused no harm or discomfort to anyone," a teacher from his school in Soke, who was not named, told the Hurriyet daily.

He attended a special school for training future policemen and then joined the Ankara anti-riot police -- the Cevik Kuvvet in Turkish -- in 2014.

According to the Hurriyet daily, he had provided protection for Turkey's President Recep Tayyip Erdogan eight times since summer this year.

For the Turkish authorities, the motivation for the crime is becoming more and more clear -- that he was linked to the group of US-based preacher Fethullah Gulen blamed for the 2016 failed putsch bid against Erdogan.

According to Turkish media, Gulen-related books were found at his home and he is also alleged to have attended a Gulen-backed cramming school (dershane in Turkish) in 2014 to help with exams.

A dozen people, including his closest family, have so far been detained over the murder with the authorities actively checking their possible links to Gulen.

Gulen has denied any links to both the coup and the assassination.

The Sabah daily said among those detained was Suleyman Ergen, a so-called "imam" or senior agent of Gulen who had taught Altintas at the Rustu Unsal police academy in Izmir.

According to the state-run Anadolu news agency, Altintas had taken two days sick leave on the day of the July 15 coup. It remains unclear what he did on his days off, it added.

He also called in sick complaining of stomach pains on Monday -- with a note from the same doctor.

But Russia, which has sent a team of 18 investigators to Turkey, have urged the authorities not to leap to hasty conclusions and said it is too early to say who was behind the murder.

Altintas shouted "Allahu Akbar" (God is greatest) and "Don't forget Aleppo" as he waved his gun around at the cultural centre.

While relations between Turkey and Russia had improved drastically in recent months, there had been angry demonstrations in the country over Moscow's support of President Bashar al-Assad in Syria.

According to Anadolu, Altintas' body is at a morgue in Kecioren outside Ankara and the autopsy has been completed. So far, no one has come forward to claim his body.