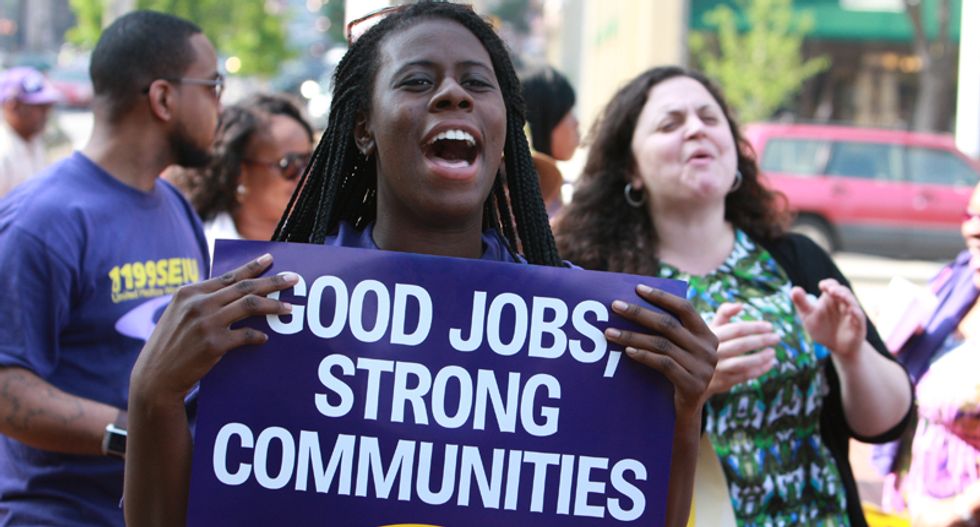 As reported by Bloomberg Businessweek, the Service Employees International Union (SEIU) is drastically cutting its budget over the next year as it prepares to do battle against an all-Republican government -- and that's a disaster for working people.

To be sure, the SEIU's tactics have been highly controversial within the labor movement as a whole, and there's still debate over whether its focus on member growth has done much to really bolster the power of organized labor in the United States.

Nonetheless, the SEIU has been a vital force in keeping the concerns of working people in the news through its innovative campaigns such as Justice for Janitors and Fight for $15. The SEIU has also been the rare union in the United States to regularly post membership growth at a time when union growth overall has been in decline.

Below, we'll go through some of the SEIU's major accomplishments -- and explain why the union's decline will be major disaster for working people.

1.) Fight for 15. The fight to push for a $15 minimum wage across the United States has been the SEIU's most visible -- and successful -- campaign. Slowly but surely, the campaign has successfully fought to raise the minimum wage in major states such as New York and California, while also securing $15 minimum wages in cities such as Seattle.

SEIU's work on raising the minimum wage has even penetrated deep red states such as Arkansas and Nebraska, which both passed statewide minimum wage increases via ballot initiatives.

The campaign has successfully negotiated dozens of "master contracts" for custodial workers that apply to union janitors across multiple markets, and thus raise wages for broad swathes of workers.

3.) SEIU has grown at a time when other unions have shrunk. Janitors weren't the only non-traditional workers that the SEIU has had success in organizing -- indeed, the union's push to organize workers from across the service economy has been one of the biggest reasons for its growth.

Among other things, the SEIU has had success organizing workers in areas such as health care and food services, which in the past had been wastelands for union representation. These industries also happen to be among the fastest growing in the country, which has helped SEIU's ranks grow from 1.46 million members in 2002 to nearly 1.9 million in 2014.

4.) SEIU's political organizing has given Democrats a blueprint for winning in the Southwestern United States. While Hillary Clinton's presidential campaign infamously floundered in the Rust Belt, it did rack up solid successes in states with growing Latino populations such as Colorado, Nevada and New Mexico, while coming within striking distance in the traditionally red state of Arizona.

The SEIU played a significant role in helping get people to the polls in Nevada, as its ties among the service workers' community in Clark County proved to be an extraordinarily valuable asset for the Clinton campaign.

5.) SEIU's major contract with for New York and New Jersey airport workers offers a blueprint for organizing workers across multiple subcontractors. The widespread use of subcontractors makes union organizing trickier, as it's challenging to get workers at places such as airports under the same umbrella when they're all employed by separate contractors.

However, SEIU's recent victory in reaching a labor contract that spans across 11 separate subcontractors at three major airports -- JFK International and LaGuardia in New York, as well as Newark Liberty International Airport in New Jersey -- shows it can be done.

The recent SEIU-negotiated deal, which brings 8,000 New York and New Jersey airport workers to organized labor for the first time in their history, includes workplace protections such as "seniority rules, scheduling protocols, disciplinary procedures and health and safety guidelines."

The contract covers a little more than half of the subcontracted workers at the three airports, and includes protections for baggage handlers, airport security officers, wheelchair attendants, skycaps, cabin cleaners and terminal cleaners.

Iraq closed public buildings and temporarily shut airports Monday as another sandstorm -- the ninth since mid-April -- hit the country.