'This is completely unusual': How Trump has shredded the rules of American politics 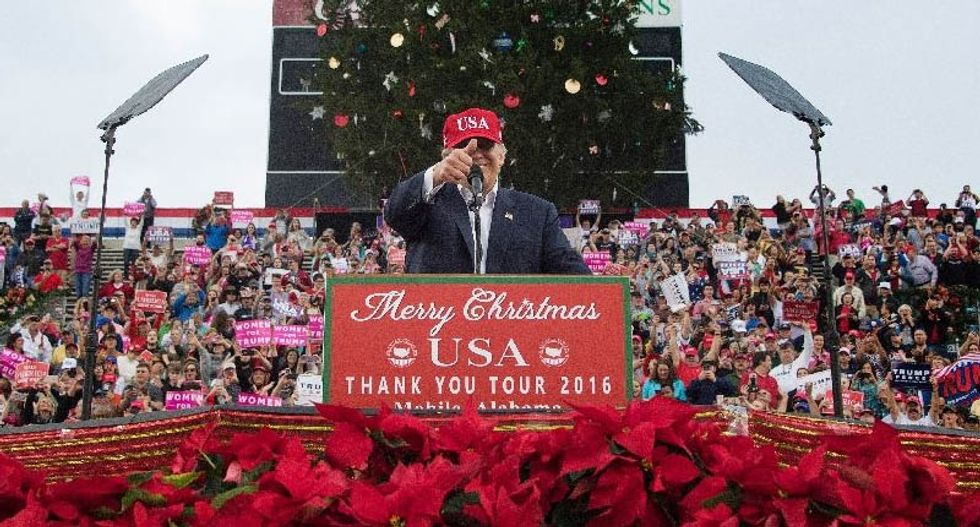 During his unorthodox White House campaign, Donald Trump thoroughly shredded the rules of American politics, from his often coarse language to his intermittent disdain for basic concepts like freedom of the press.

Since defeating Democrat Hillary Clinton on November 8 to become the US president-elect, his title until he succeeds Barack Obama on January 20, he has made a mockery of those who said he would eventually fall in line.

While he admittedly followed protocol during his post-election visit to the White House, treating Obama with deference in the Oval Office, the Republican billionaire has otherwise blazed a new path in presidential transitions.

His style seems to indicate that the Manhattan property mogul will be a president like no other.

Candidate Trump thrived on the campaign trail at his large arena rallies. President-elect Trump has tried to recreate that atmosphere with his "thank you" tour through the swing states that propelled him to victory, wrapping up Saturday in Mobile, Alabama.

Hats with slogans, anti-Clinton chants and plenty of colorful signs? They're back.

"They are saying, as president he shouldn't be doing rallies but I think we should, right?" Trump told the cheering crowd in Mobile.

"We've done everything else the opposite. This is the way you get an honest word out because you can't give it to them because they are so dishonest," he added, slipping in one of his customary jabs at the media.

For Peter Kastor, a history professor at Washington University in St Louis, "the 'thank you' tour is unusual for presidents, but it is completely consistent with his campaign style."

"Every president has in some way constructed the trip to the national capital as a symbolic move, and Donald Trump is doing so in a way that is unlike all of his predecessors," he said.

- Press conferences? No, thanks -

Eight years ago, at this stage of the transition, Obama had held nearly a dozen press conferences, in the midst of an economic crisis.

The 70-year-old president-elect has given a handful of interviews, including three lengthy ones to CBS, The New York Times and Fox News.

When Bill Clinton, George W. Bush and Obama wanted to make key cabinet nominations, they introduced their chosen ones to the press.

Trump sends statements, many of them either at 6:00 am or late at night, or simply posts news on Twitter.

And his incoming chief of staff Reince Priebus created a stir in the White House press corps by suggesting major changes could lie in store for the traditional daily media briefings.

The recruitment of his cabinet so far has more or less unfolded in the public eye, with most candidates forced to run the media gauntlet through the lobby of Trump Tower or at his resort properties in New Jersey or Florida.

Former Trump critic-turned-admirer Mitt Romney made the pilgrimage twice, only to be dumped as secretary of state-designate in favor of ExxonMobil CEO Rex Tillerson... who Trump only met for the first time on December 6.

Usually, state governors and US senators are the most likely choices for cabinet posts. Not this time.

Trump has chosen an inner circle in his own image -- mainly white, mainly male industry titans and investors, many of them millionaires and a handful of them billionaires.

Keeping the male-female divide even in politics has always been a challenge in the United States.

There were only six women given cabinet or cabinet-rank positions in Obama's first administration, but one of them was secretary of state Hillary Clinton.

Trump has so far chosen four women, all for second-tier posts. The first 11 people in the order of presidential succession will be men.

And so far, he has named only one African-American -- Ben Carson -- and no Latinos.

Incoming first lady Melania Trump and the couple's 10-year-old son Barron will not move into the White House on January 20 as is customary, instead remaining in New York at least until the school year ends.

For Kastor, this is a first.

"These are big cultural moments about the presidency -- the transition is often the story about how this family is going to move," he told AFP.

"There are all these stories about how they are packing up, and about what does it mean to move from a simple, private residence into this big, public one," Kastor added.

"So this is completely unusual."