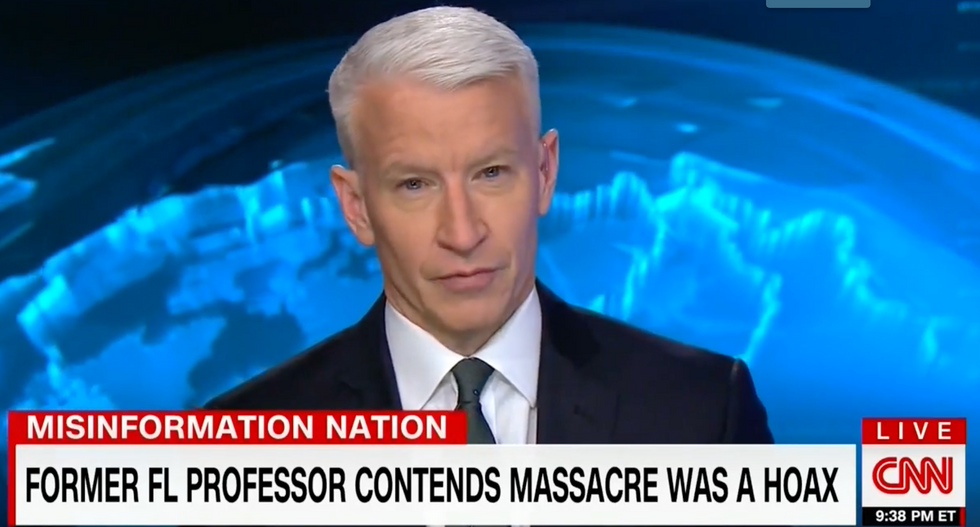 On Anderson Cooper’s “Keeping Them Honest” segment Thursday, the host addressed reports that police arrested a Florida woman for making death threats against the parents of a child killed in the 2012 Sandy Hook massacre, calling out the "sick" and "insane" conspiracy theories that are resulting in real-life consequences for victims' families.

Next weeks marks four years since a deranged lone gunman opened fire on an elementary school in Newtown, Connecticut, killing 20 children and six adults. Since the attack, false and fabricated "evidence" (read: lies) on social media and elsewhere helped propel a narrative that the massacre never even occurred.

“This is really sick stuff,” Cooper said, referring to Sandy Hook truthers. “[They believe] that the shooting was a hoax orchestrated by the government and media to drum up support for gun control,” Cooper said. “They believe it never happened. As outrageous as this might sound, they’re not alone.”

“The lies that a lot of these people spread are frankly sickening,” Cooper continued. “Some individuals have harassed grieving Sandy Hook families—they’ve even claimed an interview I did in Newtown in the days after the shooting with [6-year old victim] Noah Pozner’s mom was faked.”

Cooper explained some truthers refer to the interview  between himself and Pozner's  mom as evidence of a cover-up, pointing to a frame where the host’s nose appears to disappear. Cooper explained this can happen “when there’s interference with the satellite signal and the image in interrupted in a completely random way. Why they think I wouldn't have driven up to Connecticut to cover this from New York City seems odd given that I’ve travelled all around the world to report on stories.”

The Anderson Cooper 360 host then railed against the misinformation purported by Sandy Hook truthers:

“Just to put this to bed, let me be clear: their claim is insane. I was there. I talked to the families. I was invited into their homes in some cases. I saw a grieving family’s pain, they were not actors they were real parents suffering unimaginable loss.

It doesn’t even need to be said like that.”

Cooper then aired an interview with Noah Pozner’s father Len Pozner about the threats his family faced from people who believe Sandy Hook was staged. Pozner described the online hate as “a thought virus,” noting “the hoax concept just continues to spread.”

Indeed, Sandy Hook truthers are often provided a wider platform than many recognize, particularly as social media makes fabricated stories harder and harder to vet. Noted conspiracy theorist and prominent Donald Trump supporter Alex Jones commented on the Sandy Hook massacre as recently as November, doubling down on his earlier claim that the slaughter didn’t occur as the media suggests.

"We've sent reporters up there, man, and that place is like Children of the Corn or something. I mean it is freaking weird," Jones said during an InfoWars segment last month. "All I know is something's going on and you don't like us looking at it. You don't like us questioning you.”

"You've appeared on Jones' radio show, praised his 'amazing' reputation and promised him that you 'won't let him down,'" she wrote. "Now he's claiming you've personally called to thank him after the election, and will be on his show again soon."

And as truthers like Jones boast about having the president-elect's ear, communities like Newtown watch tragedies unfold while hoaxers attack new batches of grieving families. “With every public incident, it’s immediately labeled a hoax by this certain circle of people that are on the web,” Pozner told Cooper, citing the attack on Pulse nightclub in Orlando, Fla. “There was hoax content coming out while the [Pulse nightclub] shooting was still going on," he added.

“This happens to anyone really online,” Pozner said. “It’s sort of like cyberbullying but not within the context of school, it’s in the context of anyone. It’s basically just hate. They’re projecting hate onto someone.”

Watch Cooper’s poignant remarks and his interview with Pozner below, via CNN: