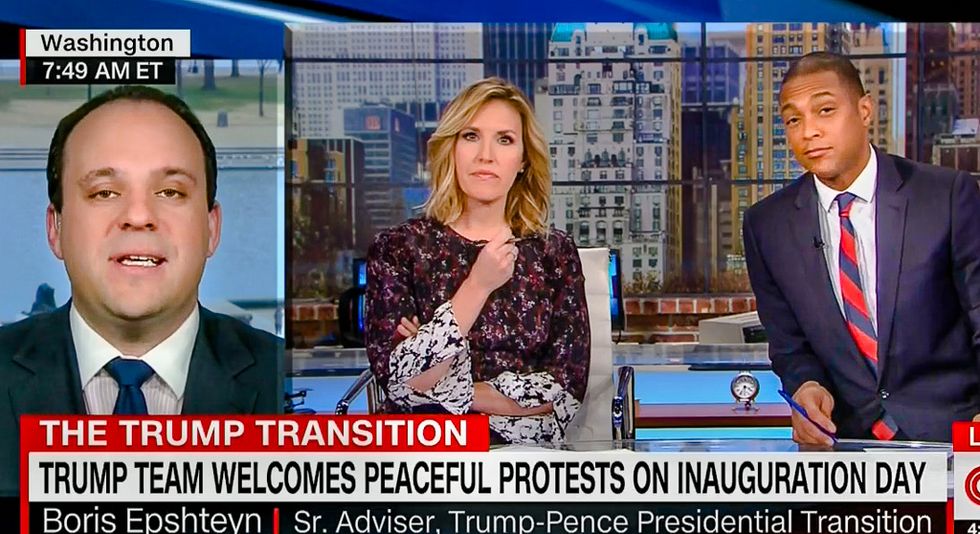 Senior Trump adviser Boris Epshteyn on Tuesday dismissed a Women's March on Washington to protest the inauguration, and argued that an "overwhelming" number of female voters actually support the president-elect.

Organizers of the Women's March on Washington claim the event will bring thousands of women to protest Trump's inauguration and "send a bold message to our new administration on their first day in office, and to the world that women's rights are human rights."

"As you know, the relationship between the president-elect and many female voters was more than contentious during the election," CNN host Poppy Harlow reminded Epshteyn during a Tuesday interview. "How will he address the protest? How will he handle that?"

Epshteyn, however, said he refused to "accept the premise" that women opposed Trump.

"Women in overwhelming numbers voted for Donald Trump -- not the majority of women, but we received a great amount of support from women in this election," the Trump adviser opined. "We very much respect the First Amendment. And we understand that people choose to protest. As long as they do so within all laws, rules and regulations, they are welcome to do so."

"We understand that people have concerns but we welcome them to our side," he added. "We hope some of those will come to D.C., change their mind. Instead of protesting, come celebrate with us."