Dem schools Trump surrogate over hacks: You see conspiracies everywhere - except where there is one 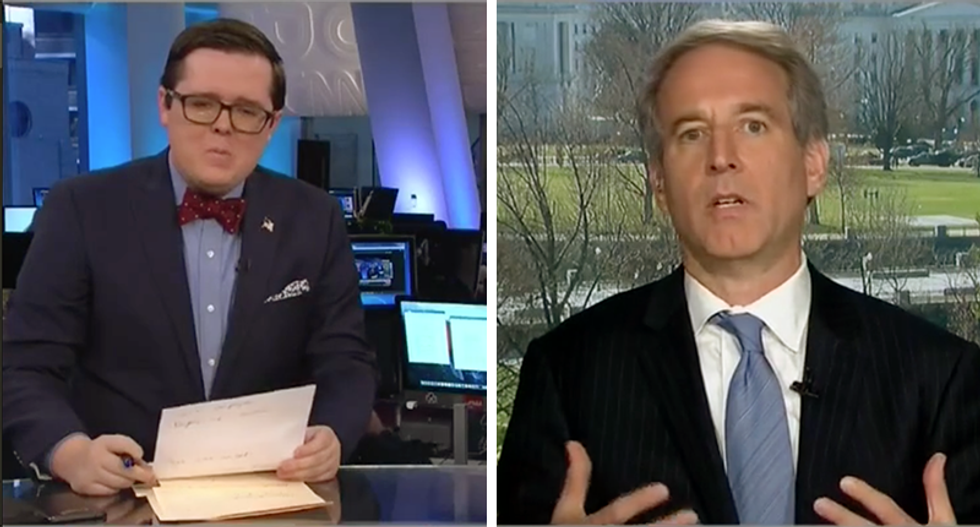 Millennial Donald Trump surrogate Harlan Hill got schooled by a conservative Third-Way Democrat on CNN Monday morning when he denied evidence of the Russian hack.

"I actually have not seen a shred of evidence to prove that the Russians were behind it," Hill said. "I have seen reports and claims of a secret investigation by the CIA."

Host John Berman cut Hill off to ask if he'd seen the Oct. 7 memo from the DNI and Homeland Security and Hill admitted that he had it with him but still didn't believe it.

"So, wouldn't it be great if the incoming chief of staff and the president-elect said, 'Hey, let's investigate?'" Berman asked.

Hill explained that the reason they aren't is because this "smells" as if it is a conspiracy fueled by the Clintons to undermine Donald Trump. He also believes that Sen. John McCain's involvement in promoting the news about the Russian hack is also about undermining the Trump administration. Indeed, all of the Republicans who are demanding Trump acknowledge the Russian hack were against Trump in the nominating process.

"You get that in the current climate that makes no sense, right?" Margaret Hoover asked Hill. "Now the Republicans have the House, the Senate and the presidency. They have absolutely no interest in hurting the incoming Republican president. They have policies they want to get through, too."

Hill denied the claim, saying that they want to steamroll Trump. That was all Democratic Strategist Matt Bennett could take.

"Give me a break!" Bennett exclaimed. "Look, this is exactly the problem with Trump and his supporters, they see conspiracies around every corner except for the corner where there actually was a conspiracy. Seventeen intelligence agencies have determined the Russians were attempting to influence this election. If that isn't a shred of evidence or quite a bit more than that, I don't know what is. I think John McCain is exactly right. There's nothing more dangerous to our democracy than for a foreign power, a hostile foreign power, to be trying to impact our elections. It is insane to me that the Trump people are somehow suggesting that we don't even look into that."

Hill said that the 17 agencies haven't proven anything. But Bennett explained that the CIA isn't going to come to Hill's door to give him the evidence he says that he needs. That isn't the way intelligence works.

"That's not how it works!" Bennett said. "These are intelligence agencies. They don't come before cameras and make these kinds of presentations. What has to happen is the elected branches of government, including the president-elect and his team when they get to the White House, have got to cooperate with this and the elected branches of government are the ones who will make the determination. Intelligence agencies provide the evidence they are able to gather and then the policymakers are the ones who make the ultimate determination. That's why the investigation is so important."

Hill did clarify that he supports a deeper investigation into the hack to uncover who was behind it.

Check out the exchange below: