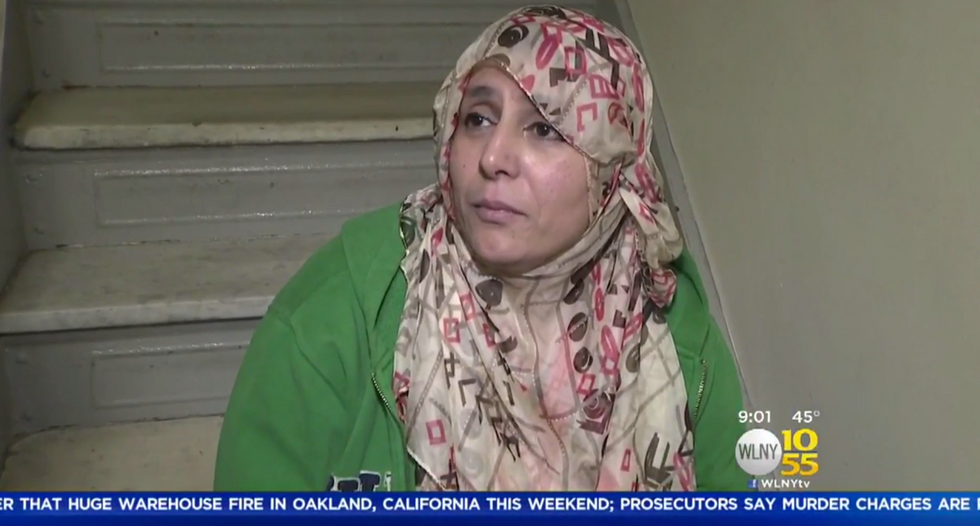 A Muslim woman who works for the New York City MTA was pushed down a flight of stairs at Grand Central Monday, as her assailant shouted Islamophobic slurs and allegedly called her a “terrorist," the New York Post reports.

Authorities are investigating the incident, which occurred around  6:20 a.m. ET Monday near the 7 train at Grand Central. Sosa Salama, an off-duty subway employee who was wearing her MTA uniform and a hijab at the time, said a man approached her and yelled that she’s “a terrorist” and “shouldn’t be working for the city.” The man then became physically aggressive.

"He pushed me down the stairs, but I couldn't find anyone to help me," Salama told the Post. "He scared me. He followed me after until I reached the police. They walked me down to where I work. I injured my knee and my ankle.”

The assailant fled the scene while Salama was admitted to NYU Langone Hospital for treatment of her injuries. Salama told the Post this is the first time she’s experienced such hate; she blames the incident in part on the election of Donald Trump, saying the president-elect “spreads this hate speech around."

"I think this hate is raised after the election," Salama said. "During the Obama administration this hate wasn't there. It's because of the hate speeches we hear on the media. In the 20 years I live here, I didn't experience something like that. As soon as the election and Mr. Trump spreads this hate speech around, it's different now. He leads the people in the wrong direction.”

CBS News reports a 35 percent spike in reports of hate crimes in New York City; NYPD have responded to at least 43 possible hate crimes since Nov. 8.

Tuesday, Mayor Bill de Blasio addressed the MTA incident, insisting the rise in crime is more complicated than Trump’s election. But he also accused the president-elect of engaging in “hate speech.”

Salama said in the wake of the incident, she will continue to wear the hijab and “will love the people and keep greeting them every day.”

"We are all immigrants and I’m proud to be here,” she told the Post. “I have a bachelor's in law and a master's degree. I’m a very civilized person. I am raising my four lovely kids. They were all born here. We are raising our kids to be the best. We are human beings. They are human beings."

Watch the local report below, via WLNY News: