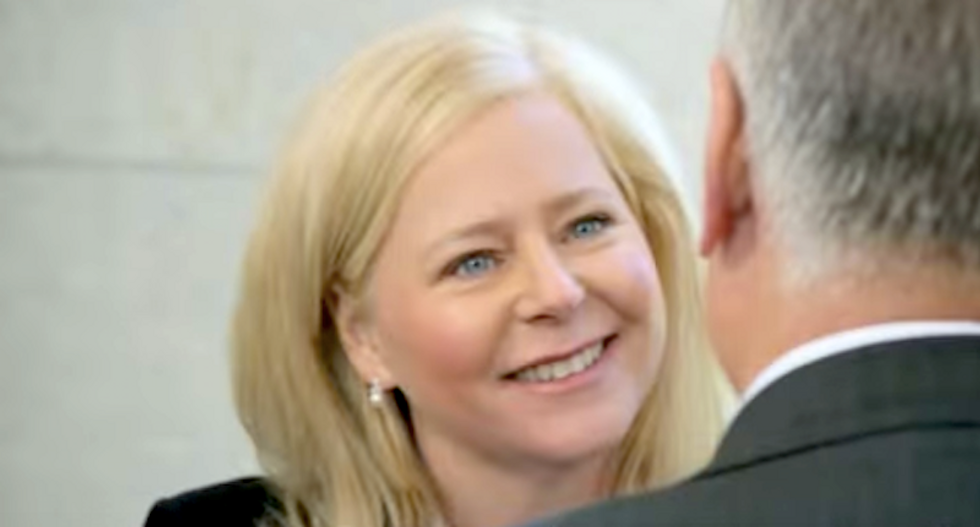 The anti-abortion extremist behind Ohio's "heartbeat bill" was booted from religious radio for promoting "dominion" theology -- or the belief that Christians should take over every aspect of society to bring the return of Christ.

Janet Porter, the former legislative director for Ohio Right to Life and the founder of the far-right group Faith2Action, has for five years urged Republican lawmakers in her home state to pass the bill outlawing abortion once a fetal heartbeat can be detected, reported Right Wing Watch.

That usually happens at about six weeks, which is before many women even realize they're pregnant.

Porter's bill -- which does not include exceptions for rape, incest or the mother's health -- was inserted into a child-abuse bill at the last minute and is now awaiting Gov. John Kasich's signature.

She used her "Faith2Action" radio program to promote conspiracy theories about President Barack Obama's birth and alleged ties to Russia, and she warned the president planned to round up Christians into internment camps and deny conservatives treatment under the Affordable Care Act.

Porter was removed from the conservative VCY America radio network for advocating for Seven Mountains dominionism, an extremist fringe view that right-wing Christians are called by God to impose their rule over government and society to hasten the Second Coming.

She later claimed she didn't even know what dominion theology was until the program was canceled, but admitted she and like-minded religious activists "just want to obey God in every area of influence and use our freedom to spread the Gospel."

She released the 2015 film "Light Wins," featuring cameos from anti-abortion lawmakers and activists, that claimed religious freedoms and American children were under attack by LGBT people.

Porter stars as herself in a semi-autobiographical romantic comedy, "What's A Girl To Do?" -- featuring Stephen Baldwin, Mike Huckabee and Rep. Steve King (R-IA) -- about her efforts to pass a "partial birth" abortion ban.

She said she persuaded King at the funeral of conservative activist Phyllis Schlafly to introduce a federal version of the heartbeat bill.