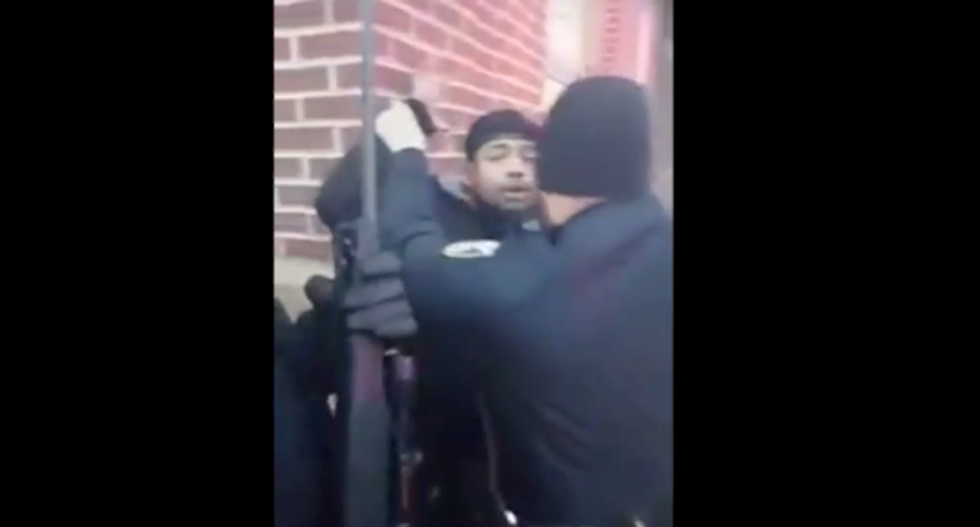 A Black Panther group says that it was harassed by Milwaukee police officers who also violated their constitutional right to open carry during an event on Wednesday, Dec. 28, ABC 12 Wisconsin reports.

The group's members — associated with the Revolutionary Black Panther Party — said they were legally openly carrying firearms during a food distribution program when police showed up and began to harass them. The group says that police took at least one shotgun, which was later returned.

The altercation, in which one person was arrested and a child was elbowed in the mouth by an officer, was recorded on a smartphone camera.

"Our mission with the Revolutionary Black Panther Party is simple. It's to help feed, clothe, train, shelter and defend our people," General Jamal Canon explained. "And we have the right to do that without any interruption, without any harassment, without any terrorism."

"Because we open carry, it does not mean we are looking for a fight. We are peaceful unless we need to be otherwise," member Vaun Mayes added. "Weapons were taken illegally. One was returned. The other was held, along with our comrade who was taken on a petty warrant," he said, according to Fox 6 Now.

Members of the group said police elbowed 10-year-old Nya Bryant in the mouth, which resulted in a "busted lip." She said she went over to her parents because she was scared. Bryan't mother said she plans to hire an attorney to file a complaint against the officer.

Milwaukee police, who claim they were at the scene and saw someone mishandling a shotgun, issued a statement about the incident. "Milwaukee police responded to a subject with a gun call. Officers monitored a group of armed demonstrators and encountered a subject who was unsafely handling a firearm," the statement read.

Critics of the Milwaukee Police Department say it has a long history of abusive tactics and racial violence, and as recently as August 2016 the city faced two nights of unrest after a police officer fatally shot 23-year-old Sylville K. Smith, a black man. The department has also engaged in surveillance of activist groups, such as the NAACP Youth Council.

Revolutionary Black Panther Party members claimed on Wednesday that this is the "latest act of harassment" that they have been subjected to by the Milwaukee Police Department. "We've been followed, filmed and monitored by MPD," said Mayes.

Cannon told the outlet, "Our mission will not be deterred by these tactics."

The incident was live streamed on Facebook by Wisconsin Jobs Now.