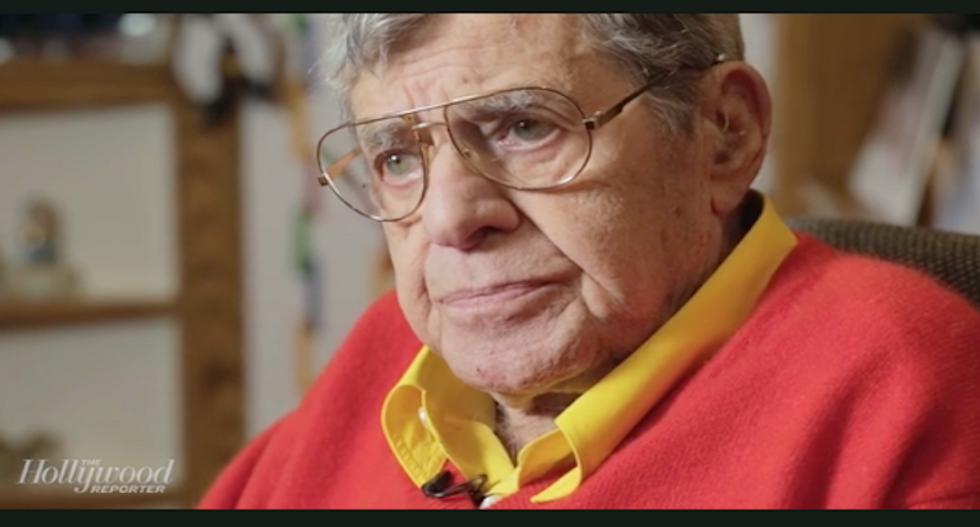 Actor and comedian Jerry Lewis recently joined the Hollywood Reporter for an interview series, which the outlet had planned to do with "10 nonagenarians in the business — people in their 90s and beyond still vital and working."

According to the Hollywood Reporter, nine of the interviews went great but the tenth was a mess, and that was because of 90-year-old Lewis' awkward and difficult attitude about the whole thing.

Interviewer Andy Lewis wrote, "I had a bad feeling the about how the conversation with Jerry Lewis was going to go the second I walked into his Vegas house." He noted also that it seemed the comedian chose to be "as uncooperative as possible." Perhaps that's because he was so matter-of-fact.

In response to his first Hollywood Reporter question, "Have you ever thought about retiring?" Lewis responds, "Why?" When asked, "Was there never a moment when you thought to retire?" Lewis sternly asks, "WHY?"

When asked why Lewis and other late-in-life comedians who didn't retire why they felt driven to continue their work, Lewis responded, "We do it well."

The interviewer says to Lewis, "You've had a number of health issues over the last few years --" and Lewis cuts in, "Anyone that's 90 does."

Lewis was quick to support Trump in the 2016 election, calling him "great" and a "showman." He also once said of Syrian refugees, "If 11 guys in the group of 10,000 are ISIS, how can I take the chance? I don’t want to lose another Frenchman or another Englishman. That bothers me."

The 90-year-old is also as sexist as he is racist. According to the Wrap, Lewis said women aren't funny, but crude, and don't have what it takes to be a comedian. "Seeing a woman project the kind of aggression that you have to project as a comic just rubs me wrong," he said.

This is also the man who said he would, "put [Lindsay Lohan] over [his] knee and SPANK her," if she wasn't satisfied by him smacking "her in the mouth," the Huffington Post reported in 2010. "I would smack her in the mouth and be arrested for abusing a woman," he said.

See the full interview in all its glory below.