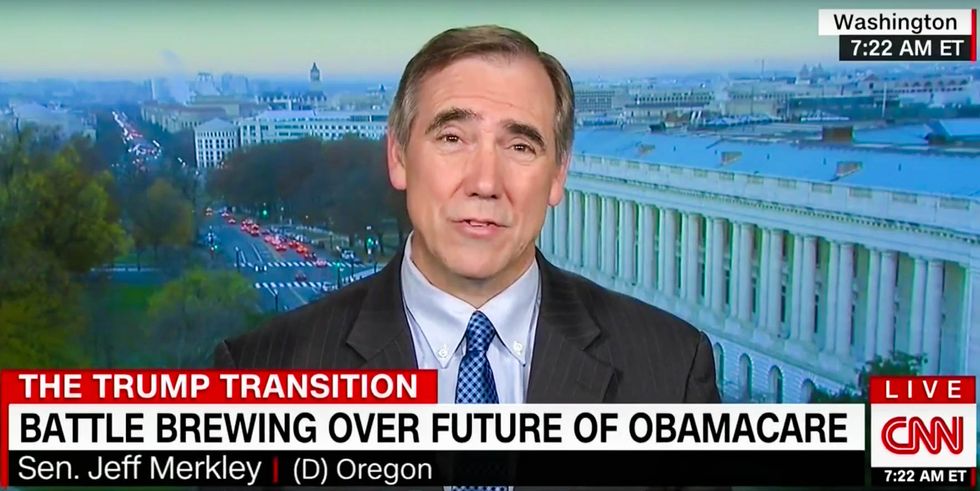 The Republican Party's dream of repealing the Affordable Care Act is now finally within their grasp -- but do they really know what they're going to do to replace it?

Sen. Jeff Merkley went on CNN Wednesday and told host Chris Cuomo that the GOP is actually "terrified" of repealing Obamacare because they know doing so without a real backup plan will create massive chaos and generate a swift political blow back.

"The Republicans are terrified of actually repealing because so many elements are quite popular," Merkley said. "The idea that you can have insurance even if you have preexisting conditions, the fact that children can stay on your policy until age 26, the investment in prevention, because prevention is so much smarter than treating diseases down the road -- all of these elements really resonate."

The Republicans' current plan is to vote to repeal Obamacare, and then delay ending most of the law's funding and payment mechanisms for three years as a means to avoid an immediate backlash. Of course, this delay would also create vast uncertainty in the individual insurance market and could lead to a mass exodus in insurance carriers from exchanges, which would in essence rip away health insurance from millions of Americans.

Check out Merkley's full interview with Cuomo below.