Fox's Judge Jeanine has bonkers rant: If you investigate Russian 2016 hacking, you're against America 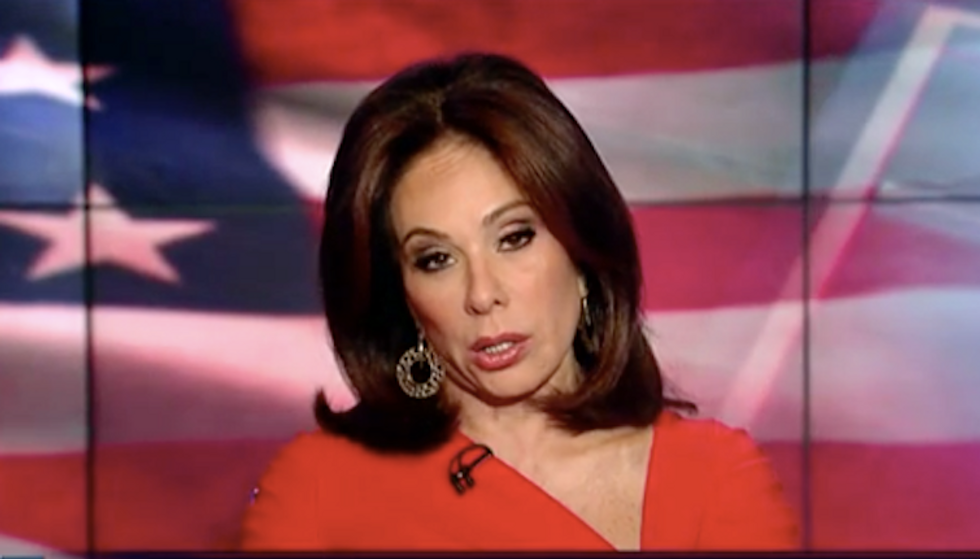 The former Republican political candidate and TV commentator said that Pres. Obama's investigation into Russian interference in the 2016 election is unpatriotic and that to question Donald Trump's victory is an act of aggression against the country.

"Why are you so obsessed with Russia?" she demanded of Obama, going on to accuse him of sympathizing with radical Muslims instead of a "Christian" like Vladimir Putin.

"I despise all dictators, but between the dictator that thinks I'm an infidel and [wants to] have our heads cut off and the dictator from whom I simply want to keep my distance... the choice is a no-brainer," she said, although it was not clear what dictator she believes wants to decapitate her.

"WE HAVE A NEW PRESIDENT ELECT…. HIS NAME IS DONALD J TRUMP. SO MOVE OVER BARACK," Pirro wrote.

"MOVE OVER HILLARY, HARRY, JILL AND ALL YOU NAMBY PAMBY PATHETIC LOSERS STILL CRYING IN YOUR GRANDE DOUBLE SHOT SKINNY LATTES," she fumed.

"THERE WAS A TIME IN THIS COUNTRY WHEN WE UNITED BEHIND THE FLAG IN CELEBRATION OF AMERICA'S NEW PRESIDENT, OUR NEW LEADER, WE ALL DID SO IN 2008 WHEN BARACK OBAMA WAS ELECTED. WE HAD HIGH HOPES FOR A UNITED COUNTRY, IRRESPECTIVE OF OUR POLITICS. AND IT'S TIME FOR THE LEFT, ASSUMING THEY ARE CAPABLE, TO SHOW THE SAME DIGNITY AND CLASS TO THE 45TH PRESIDENT-ELECT," she said.

To Pirro, the fact that Obama has called for a comprehensive investigation of the role Russia may have played in tipping the U.S. election to Donald Trump is an act of disrespect.

"THIS ISN'T ABOUT THE ELECTION. IS IT MR PRESIDENT? THIS IS ABOUT DOMESTIC POLITICS. IT'S NOT ABOUT NOVEMBER 2016 , IT'S ABOUT JANUARY 2017 AND YOUR ATTEMPT TO PREVENT DONALD TRUMP FROM THE SMOOTH TRANSITION OF POWER AND YOUR INABILITY TO FACE THE OVERWHELMING ELECTORAL COLLEGE WIN THAT THE AMERICAN PEOPLE GAVE HIM," she said.

In fact, Trump's Electoral College was won by the slimmest of margins and he was defeated by more than 2.5 million votes in the popular vote.