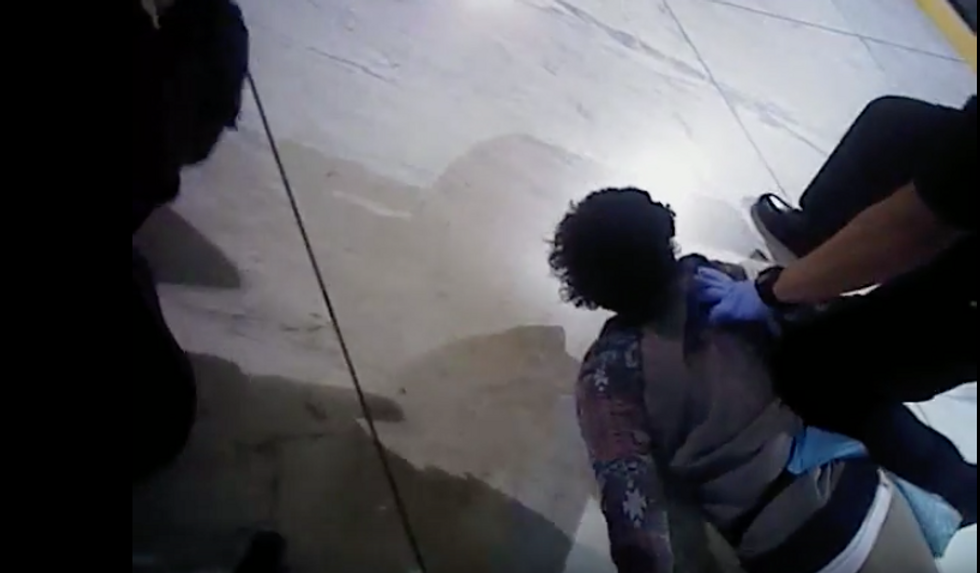 After a violent altercation between BART police officers and a black couple in San Francisco earlier this year, Andrea Appleton is now alleging that the incident caused her to miscarry, KTVU reports.

The confrontation occurred on July 29 at the Embarcadero station when Michael Smith was accused of trying to rob a BART train passenger. Newly released police body camera footage shows officers stopping Smith and yelling at him to get down as he exits the train, without ever telling him why he is being stopped. The video shows officers with guns already drawn.

A BART officer reported that police received a 911 call from a passenger who said, "I'm reporting two African Americans on a BART train right now, one just threatened to rob me. We believe he has a weapon on him." Police did not find a gun on either of the individuals and Appleton claims that the passenger had been harassing them.

Appleton said she was in her first trimester of pregnancy and the couple was headed to a doctor's appointment.

The footage that was released this week shows officers forcefully handcuffing and pinning the couple to the ground. Smith can be heard yelling to officers multiple times that Appleton was pregnant. "She's pregnant! She's pregnant!" he shouted.

SF Gate reports that the agency has a policy against handcuffing pregnant people behind their backs; however, that did not deter them from cuffing Appleton.

Appleton said she lost the baby two weeks after the confrontation. She blames the officers' actions and the stress that they caused her. "It's not fair to me and my boyfriend to lose our child and to you know… be having to go through this," Appleton said during a press conference on Wednesday afternoon.

BART spokeswoman Alicia Trost said in a statement, that "it was not clear or known if the female was pregnant," specifically because "she was not visibly showing."

The statement continued, "After the adult female said she was pregnant, body cameras show the officer treated her with respect, stood her up in a comfortable position almost immediately, moved her away from possible injury that could occur, and asked her about her well-being or if she needed medical attention, which she declined."

Speaking from public defender Jeff Adachi's office on Wednesday, Appleton said, "I was thinking like we were gonna get hurt because I was thinking about what happened to Oscar Grant so I was just scared." Oscar Grant was fatally shot by BART officers in Jan. 2009.

Adachi is now calling for all remaining charges against Smith to be dropped, as an internal investigation into the officers' use of force is underway.

The altercation was not handled according to protocol. Adachi noted that when Smith was initially approached by officers, he should have been notified as to why he was being stopped. "Under the law, police have to tell you why you're being stopped," Adachi said.

BART's Deputy Chief Jeff Jennings said the confrontation would not have escalated had Smith not resisted. "If Mr. Smith would have just sat there and put his hands up and went down on ground, if he chose not to spit, chose not to bite my officer, he would have been home and none of this would have happened," he said.

But Adachi was unconvinced, noting, "If the officers use excessive force, you are allowed to use reasonable force to defend yourself."

"We often talk about policy and the use of force, but this is an actual case where you can see how the system failed Michael Smith and Andrea Appleton," Adachi added.

You can watch the footage below for yourself. (Content warning: police violence.)