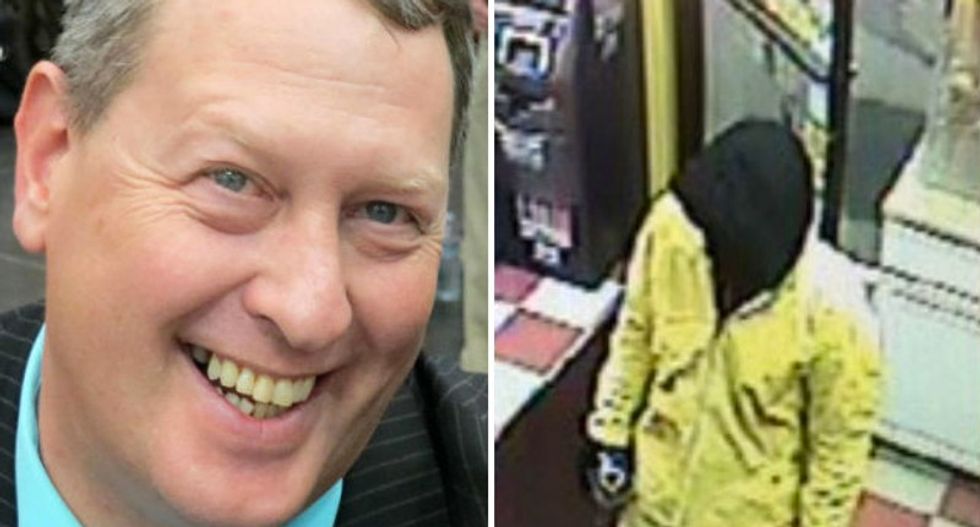 David Wicks (Left) and the suspect associated with his murder. (Photo: GoFundMe and surveillance footage)

Investigators in Burney, California, west of Redding, are looking for a person who walked into a convenience store, doused a well-liked clerk in a sprayed flammable liquid and set the man on fire.

The entire event took no more than 15 seconds, The Statesman reported, but the man has died. David Wicks was standing behind the counter of the Rocky Ledge Shell station Dec. 22, when, shortly after 7 p.m., the killer walked in wearing a black hood, black gloves, a yellow rain jacket and pants. After lighting Wicks on fire, the person walked back outside and rode away on a black bicycle. A black bike was later found near the store but police are unsure if it is the one the killer used.

“I can’t imagine somebody, knowing Dave, why would anybody do this?” co-worker Kris Cantrell said in an interview with the Record Searchlight.

A truck driver who stops by the store from time to time came in the following day, only to learn his friend had died and what caused his death.

“I could’ve stopped by three or four other places, but I knew the manager. I knew him,” Gulizia explained to the paper.

The county sheriff's office said that the Department of Justice could get involved in the case and is currently reviewing the information. Arson investigators are also assisting on the case.

Friends have set up a GoFundMe page to help Wicks' family. Secret Witness of Shasta County California is offering $15,000 for any information that could lead to an arrest and conviction of the person responsible.

Matt Blowers has known Wicks for six years and described him as a "very nice guy" who always had a smile on his face.

Anyone with information can call the Sheriff's Office Major Crimes Unit at 530-245-6135 or email mcu@co.shasta.ca.us. Anonymous tips can also be left with Secret Witness at 530-243-2319 or scsecretwitness.com.