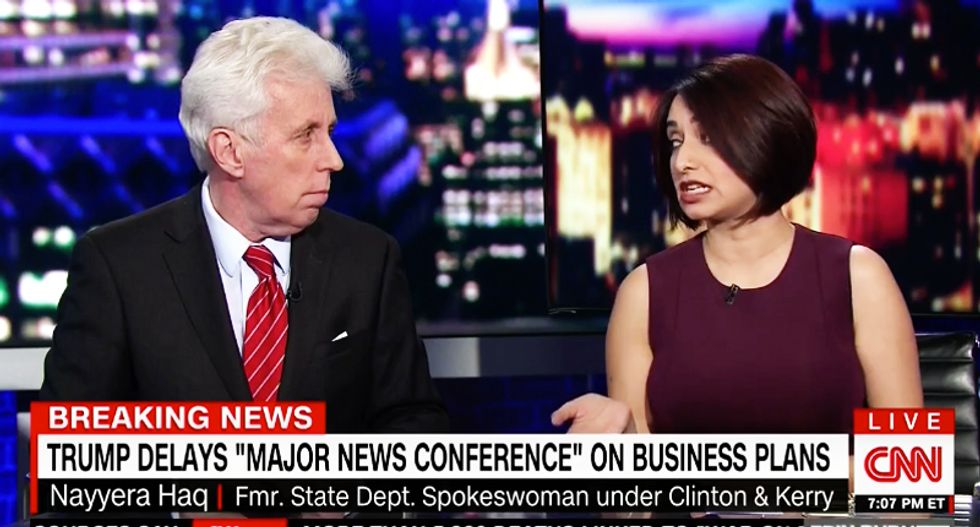 President-elect Donald Trump's decision to cancel a long-scheduled press conference on Thursday --where he was expected to address how he would separate himself from his businesses -- opened up a can of worms Monday night, with a CNN panel wondering why the Trump continues to duck the press.

CNN host Erin Burnett asked CNN media analyst Brian Stelter about the curious decision to duck teh press at a time when there are so many controversies swirling around the president-elect.

"Is this about he doesn't want to have a press conference right now before the electoral college or something else?" Burnett asked.

"The question is, what is he hiding? What is he hiding?" Stelter said. "I keep asking what is he afraid of the answer? This is not about, to me, not about his businesses. Most president-elects have a press conference a few days after being elected. That means early or mid-November. This goes all the way back to Carter. Normally you step out and answer questions whether you're elected for the first time whether you've been re-elected. it's been almost five weeks. So what is it that he doesn't want to answer? Yes, he's given a few interviews, 60 Minutes, Fox News, and he's been tweeting. We've not seen him answer a lot of question, so what is he hiding? why doesn't he want to answer questions this week from reporters?"

Trump advocate Jeffrey Lord jumped into defend Trump saying the president-elect "wants to get it right, because if he gets it wrong "the media would be all over him."

"He could have been far more transparent in sharing what the challenges are," Haq explained. "We haven't seen tax returns. We're not seeing a press conference in 140 days on any topic. There's a consistent lack of transparency almost that indicates me wasn't expecting to be president."

"I mean, he's known for a long time he was running for this office, why weren't things in the works?" she continued. "Why wasn't this a process that had been sorted out or at least a direction?. He's benefiting from a lowered set of expectations, where it's easy to say,'Well, this is a unique circumstance.' He knew what he was getting into and it's not fair to say that he's absolutely not going to divest and not going to create a trust."