After US exit, Asian nations try to save TPP trade deal 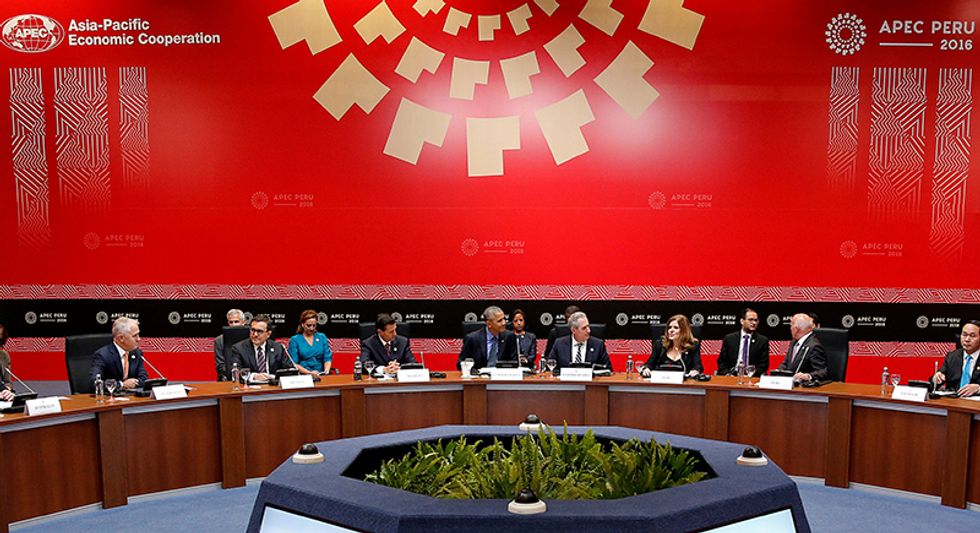 Australia and New Zealand said on Tuesday they hope to salvage the Trans-Pacific Partnership (TPP) by encouraging China and other Asian countries to join the trade pact after U.S. President Donald Trump kept a promise to abandon the accord.

The TPP, which the United States had signed but not ratified, was a pillar of former U.S. President Barack Obama's policy to pivot to Asia.

Japanese Prime Minister Shinzo Abe has touted it as an engine of economic reform, as well as a counter-weight to a rising China, which is not a TPP member.

"Losing the United States from the TPP is a big loss, there is no question about that," Turnbull told reporters in Canberra on Tuesday. "But we are not about to walk away ... certainly there is potential for China to join the TPP."

In Beijing, Foreign Ministry spokeswoman Hua Chunying did not say directly whether China would be interested in joining the TPP but that at a time of economic uncertainly the Asia-Pacific should make its own contributions to growth with openness.

"We think that in the present situation, no matter what happens, all should keep going down the path of open, inclusive, continuous development, seeking cooperation and win-win," Hua told a daily news briefing.

Obama had framed the TPP without China in an effort to write Asia's trade rules before Beijing could, establishing U.S. economic leadership in the region as part of his "pivot to Asia".

China has proposed a counter pact, the Free Trade Area of the Asia Pacific (FTAAP) and has championed the Southeast Asian-backed Regional Comprehensive Economic Partnership (RCEP).

Hua said efforts on FTAAP should be stepped up, adding China hoped talks on RCEP could be concluded at an early date.

New Zealand's English said the United States was ceding influence to China and the region's focus could switch to alternative trade deals.

"We've got this RCEP agreement with Southeast Asia, which up until now has been on a bit of a slow burn, but we might find the political will for that to pick up if TPP isn't going to proceed," English said.

Malaysia's trade minister said negotiators from the remaining TPP countries would be in "constant communication" to decide the best way forward.

"Notwithstanding the current position of the new U.S. administration on (TPP), we will continue to engage with our American colleagues to strengthen our bilateral trade and economic relations, given the U.S.’s importance as our third-largest trading partner and a major source of investment," Mustapa Mohamed said in a statement.

The TTP, which has been five years in the making, requires ratification by at least six countries accounting for 85 percent of the combined gross domestic product of the member nations.

"The original architecture was to enable other countries to join," Australian Trade Minister Steven Ciobo told the Australian Broadcasting Corporation on Tuesday.

"Certainly I know that Indonesia has expressed interest and there would be scope for China if we are able to reformulate it."

Japan has led the push for the partnership, which includes Brunei, Canada, Chile, Malaysia, Mexico, Peru and Vietnam.

"There is no change to our view that free trade is the source of economic growth," Japanese Economy Minister Nobuteru Ishihara told reporters.

When asked whether Japan would be open to negotiating a bilateral trade pact with the United States, Ishihara said it was uncertain whether U.S. trade officials would start such negotiations.

Japanese Deputy Chief Cabinet Secretary Koichi Hagiuda said separately that Japan was not considering moves with other TPP members based on a lack of U.S. involvement.

"As Prime Minister Abe has made clear, TPP without the United States is meaningless and the balance of interests would crumble," he told a news conference, adding Japan would keep explaining the benefits of the pact for America.

Abe had made TPP a core of his economic growth policies and along with the Obama administration, viewed it as strategically vital in the face of a rising China

Trump took office on Friday and pledged to end what he called an "American carnage" of rusted factories and crime. He vowed to bring jobs back by renegotiating what he called bad multilateral trade deals in favor of bilateral ones.

New Zealand Trade Minister Todd McClay said he had talked with a number of TPP-member ministers at the World Economic Forum in Davos last week and he expected they would meet in coming months.

"The agreement still has value as a FTA (Free Trade Agreement) with the other countries involved," McClay said in an emailed statement to Reuters.