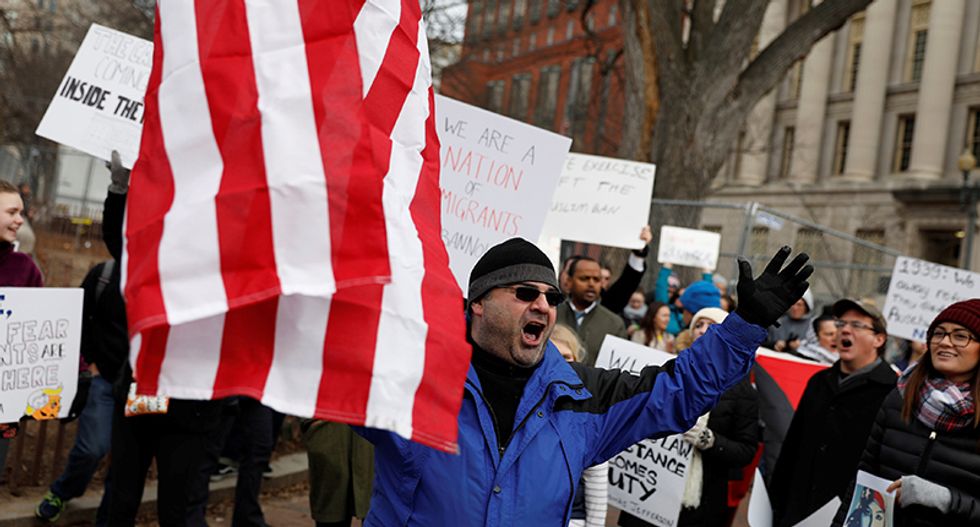 Democratic attorneys general across the United States on Sunday condemned President Donald Trump's order to restrict people from seven Muslim-majority countries from entering the country and are discussing whether to challenge the administration in court.

Democratic attorneys general are expected to be a source of fierce resistance to Trump, much like Republican attorneys general opposed former President Barack Obama's policies. A lawsuit brought by states would heighten the legal stakes surrounding the president's executive order, signed late on Friday, since courtroom challenges have so far mostly been filed by individuals.

Trump put a 120-day hold on Friday on allowing refugees into the country, an indefinite ban on refugees from Syria and a 90-day bar on citizens from Iran, Iraq, Libya, Somalia, Sudan, Syria and Yemen.

The attorneys general from 15 states and the District of Columbia said in a joint statement they would work together to fight to ensure the federal government respected the Constitution.

"Religious liberty has been, and always will be, a bedrock principle of our country and no president can change that truth," the attorneys general said.

The New York attorney general used Twitter on Sunday to appeal to travelers detained at New York’s JFK airport to contact his office.

The states could decide not to file lawsuits, and it was unclear how many would ultimately sign on for such an effort.

Trump, a businessman who successfully tapped into American fears about terror attacks during his campaign, had promised what he called "extreme vetting" of immigrants and refugees from areas the White House said the U.S. Congress deemed to be high risk.

He told reporters in the Oval Office on Saturday that his order was "not a Muslim ban" and that measures were long overdue.

The federal judge in New York said stranded travelers could stay in the country. The American Civil Liberties Union, which sought the emergency court order, said it would help 100 to 200 people with valid visas or refugee status who found themselves detained in transit or at U.S. airports after Trump signed the order.

The Department of Homeland Security said it would comply with judicial orders but that Trump's immigration restrictions remained in effect.