Black lawmakers plan to fight Trump from Day One: 'This is not the normal incoming president' 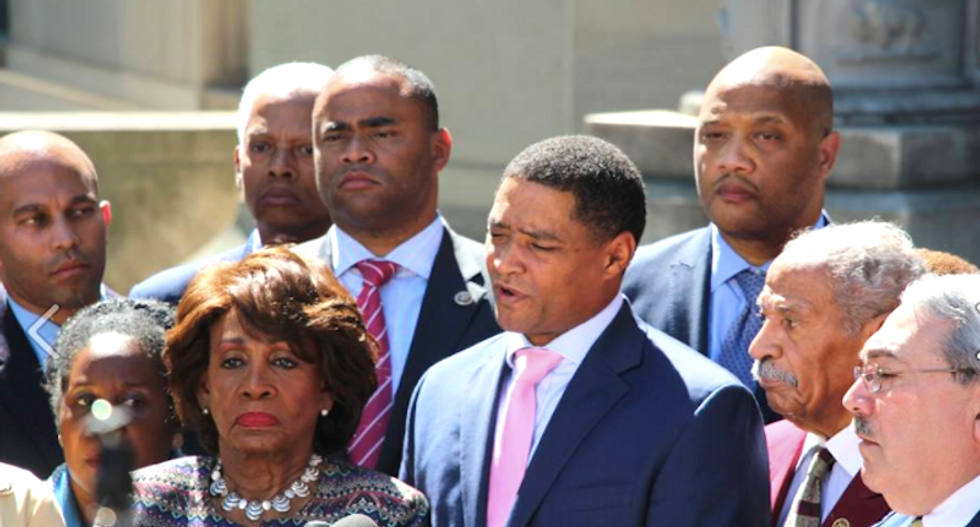 Rep. Cedric Richmond and other members of the Congressional Black Caucus (Facebook)

Black lawmakers are preparing for the worst as President Barack Obama leaves office, and they're ready to resist Donald Trump after his inauguration.

“The stakes are incredibly high, and our community is counting on us as the last line of defense between Donald Trump and the worst of what America could offer,” Rep. Hakeem Jeffries (D-NY) told Politico.

Members of the Congressional Black Caucus are worried the Trump administration poses a historically ominous threat to black Americans.

“This is not the normal incoming president,” said Rep. Emanuel Cleaver (D-MO). “We had no plan for George Bush. I think Charlie Rangel and John Conyers would tell you they didn’t even have a plan for Richard Nixon. But this is not the norm.”

The legislative group welcomes a new chairman, Rep. Cedric Richmond (D-LA), this year, and he'll outline his priorities on Tuesday, when he officially takes over leadership duties.

The lawmakers are considering everything from nonviolent protests, reminiscent of the civil rights movement, to challenging Trump on his preferred battleground, Twitter.

“We’ve dealt with loud, bombastic people our entire life -- ask our seniors and elders who went through the segregation in the civil rights movement,” Richmond said. “We’ll just go back to that fight and remember tactics from those days. But the one thing that will be clear is we’re going to have to be unified and we’re going to have to be focused and very strategic.”

The lawmakers are concerned about the Trump administration's policies on voting rights, public school funding and low-income housing -- and they believe his campaign appeals to black voters were tone-deaf and offensive.

"The campaign that we saw over the last 12 months is very frightening, and there’s been no effort on his part to even temper his comments since being elected,” said G.K. Butterfield (D-NC), the group's outgoing chairman. "It’s going to be very contentious, I suspect, if Mr. Trump even follows through on half of his promises during the campaign."

The lawmakers are suspicious of Trump's picks for his inner circle, such as Sen. Jeff Sessions (R-AL), his choice for attorney general, and Steve Bannon, whom he tapped for his chief strategist.

“The appointments should concern not just minorities but all Americans,” said Rep. Elijah Cummings (D-MD). “When you look at Sessions, I mean he doesn’t have the most stellar reputation for civil rights and voting rights. It’s rough.”

They're also concerned about Betsy DeVos as education secretary and Ben Carson for housing and urban development.

“Ben Carson, DeVos, the education nominee, those just don’t fly in the face of good governing,” Richmond said. “And to the extent that they’re going to be there, we’re going to fight.”