Chris Cuomo demolishes Trump’s absurd voter fraud claims: ‘Is he entitled to his own facts?' 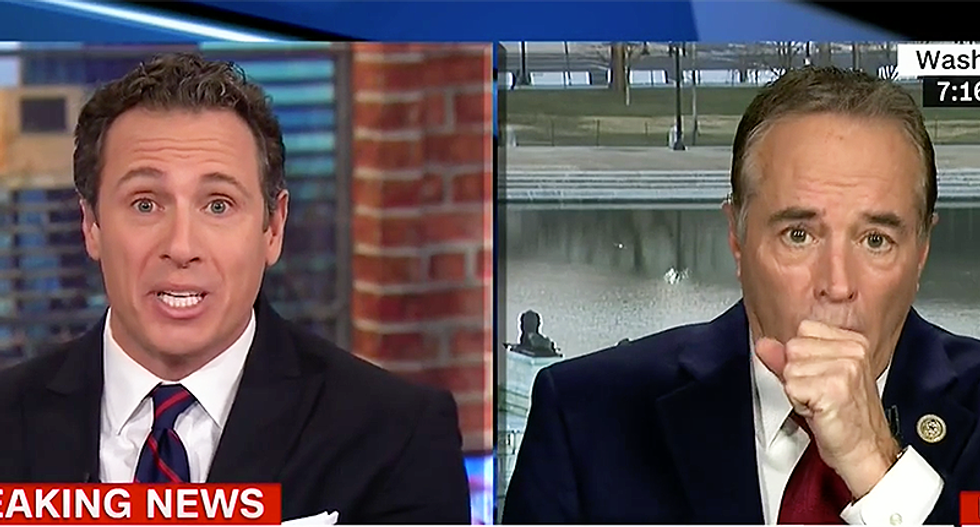 "There is zero proof of that scale of fraud," Cuomo explained. "The research that is cited by him is erroneous, and either doesn't go to the point or has been debunked."

Collins insisted that he thinks it’s always important to be sure — but the “New Day” host challenged him.

“If I said to you that 95 percent of Congress is dirty, and therefore we should investigate, and there’s no basis for what I just said in terms of that scale of corruption or unethical behavior -- you’d be okay with that because it’s always good to know for sure?” Cuomo asked.

Collins tried to claim that the two aren't the same thing, but Cuomo refused to accept his answer.

"I would say that integrity was a straight line and matters as much as anything," Cuomo said. "He has no basis in fact for this scale of fraud. You know that. You've never seen anything of any legitimacy that in anyway would have suggested anything of that scale. Is it true or false?"

Collins tried to pivot and talk about ways in which the U.S. should "tighten down" its election system, but Cuomo persisted.

"It's not about tightening down," Cuomo continued. "Do you have a shred of proof of that suggestion?"

“No, I don’t,” he said. "That’s his opinion.” He went on to suggest that there are illegal votes cast, and election officials should tighten things down.

"But that's not what the president is suggesting," Cuomo said. "Now he's going to have an investigation into something only he believes? Does that worry you on any level?"

Collins pivoted back to "tightening down" the voting system, specifically citing local elections where the vote can be closer.

"The president never said anything like what you just said," Cuomo asserted. "He is talking about his popular return and what happened there, and this is not an open area of discussion where there's a great unknown."

Collins tried to pivot again and claim he looks at down-ballot races, but Cuomo again said that what Collins was saying is not what President Trump talks about.

"He is talking about himself and what happened in his race and legitimacy that only the president seems to be questioning," Cuomo clarified.

Collins maintained that President Trump is "entitled to his opinion."

Cuomo then moved on to ask if Trump is entitled to his own facts.

Collins tried to pivot one more time and closed by clarifying that the issue isn't something he's focused on at all.