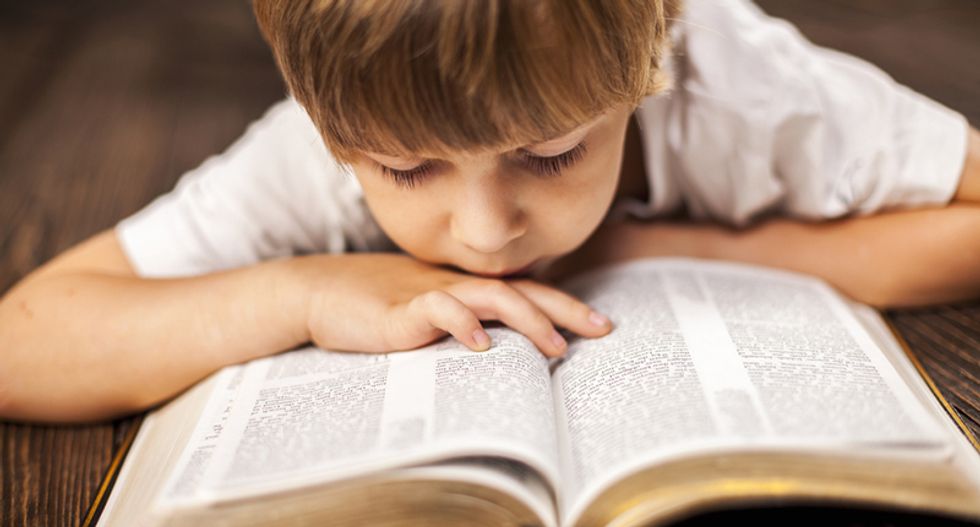 Several Christian fundamentalist schools have been downgraded in the UK after a government watchdog group followed up on an exclusive report done by The Independent.

As the site reported this summer, LGBT students were being taught that homosexuality was unnatural and girls were being told that they had to obey men. Other students reported other forms of "serious mistreatment," including "corporal punishment, exorcisms being performed on children and schoolgirls being 'groomed' for marriage to much older men."

These Accelerated Christian Education (ACE) schools were designed to create a Bible-based education for homeschool students, pastors and private religious schools, according to their site. The schools teach thousands of students at over 26 institutions, but now those schools are coming under fire by the institutions responsible rating them. As a result, their score has been downgraded, The Independent's exclusive reports.

The Office for Standards in Education, Children's Services and Skills (Ofsted) is the group responsible for regulating such schools. After the initial report, Ofsted investigated 10 schools, deciding those once rated “good” or “outstanding” must be downgraded to “inadequate” or “requires improvement.” One Ofsted report even concluded that children at one school "are at risk."

Those students who once attended the schools said that the Ofsted reports don't go far enough. They also want the government to be held accountable for not regulating, investigating and watching the schools they're assigned to audit. They are demanding to know how the government fell short so “generations of children were failed.”

The ACE program actually comes from one in the United States. While the Department of Education publishes a state-by-state breakdown of the rules outlined for private schools, each state is responsible for regulating the schools in their district and determining if there is abuse. This summer, it took an expose from The Boston Globe to spark an investigation into 67 New England private schools.

Many of these religious schools have a strict interpretation of Christianity and require students to teach themselves using only the textbook. Students in some schools were put into desks facing the wall that prevented them from seeing any other students near them. It's to inspire discipline. They look like a desk in a voting booth. This kind of education comes from the religious belief that people have to learn themselves in order to achieve salvation. So, kids must teach themselves to learn and be closer to God.

Like many homeschool textbooks, the ACE program taught creationism instead of evolution as fact and called homosexuality an "unnatural" act and "another of man’s corruptions of God’s plan.” Manuels for teachers from the 1990s instruct educators how to administer corporal punishment to students, citing The Bible as a justification for why it is an acceptable form of punishment. Other students report observing an actual exorcism during a school assembly because teachers explained students needed to

In an earlier report, one former student explained what it was like to be "groomed" by the school to marry an older man.

“You were told from a young age that your role is to support a man and God will lead you to him," she told The Independent. The role of women in these religious groups is quite clear. You’re told God has chosen a husband for you and God will lead this man to you. But in reality, pastors and church leaders guide men to you. In my view, it’s grooming.”

The schools don't give the students any standardized tests, which many students say limits the abilities to get into higher education or garner employment.

A spokesperson for Christian Education Europe said that they were unaware of the allegations.