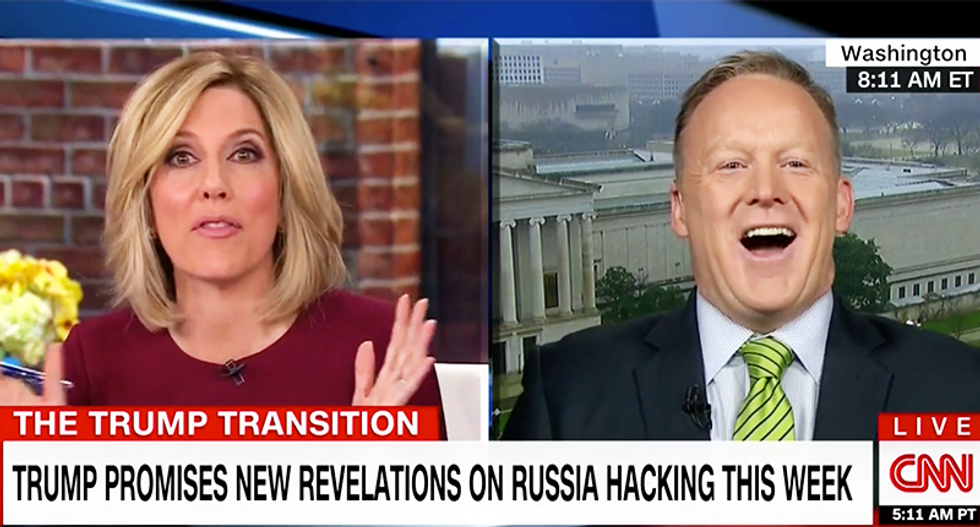 Spicer insisted that the intelligence report isn't a final one and Trump plans to wait until it is final to conclude anything. This also seems to go against anything Trump has said in the past several days about the Russian hacks. The president-elect has said time and time again that the Russians were not behind it and called the CIA's reliability into question because they were wrong on weapons of mass destruction in Iraq.

Camerota refused to let Trump off the hook.

"I said alleged hacking," she clarified. "I want to get back to my question. Is Mr. Trump, who said he's going to reveal something, he says he knows things."

Spicer said Trump would talk about his conclusions, his understanding of the situation and where he believes things stand. He then pivoted to slam President Obama for not discussing previous hacks by China in 2015.

Camerota refused to let Spicer get away with trying to make things up.

"Sean, just to correct you, you say not a single statement was ever issued or made after the Chinese hacking," she began. "I have the statement right here in my hands," she said, and went on to read the press release from the White House.

Spicer acknowledged he was wrong but then blamed Obama for releasing a statement too late.

"Sean, I'm more interested in what Mr. Trump is going to do," Camerota said, trying to get Spicer off of deflecting to Obama instead of Trump. "We're not electing President Obama again. You are representing Mr. Trump." She asked, once again, what Trump plans to do.

Spicer claimed Trump would "meet with his team, take recommendations and make a conclusion based on that as to what a proportion response should and would be."

Camerota asked what that looks like but Spicer didn't know. Instead, he pivoted to the fact that Trump doesn't have a final report.

"Because you must be planning for that possibility," Camerota questioned.

Spicer tried to claim that making any kind of a plan was "irresponsible."

"The report is not final. He's not been briefed by the heads of the intelligence community," Spicer said, admitting his earlier claims Trump has been briefed were not true.

Camerota was shocked, possibly given Spicer's earlier claim. "He has not been briefed about the heads of the intelligence community about whether or not they believe Russia is behind the hacking?"

"No they're coming in later this week to do that," he said. Spicer went on to say Obama doesn't even have a briefing on it because the report isn't final. The difference is that Obama has been briefed on the ongoing state of the issue since the first day that the hacking was found. Trump has not. He accused anyone reacting to "non-final" reports "unbelievable."

"Hold on, Sean," Camerota tried to cut in.

"No! Not, hold on!" Spicer interjected. "The idea we're asking people and making assumptions on a report that's not final is unbelievable."

Camerota cited senior Republican members on the House and Senate Intelligence Committees who have received briefing information and seen enough evidence to convince them to hold hearings.

"So, in other words, Lindsey Graham and Senator John McCain are also unbelievable and irresponsible?" she asked.

Spicer refused to attack the Republicans who have been speaking out on the Russian hack and instead blamed President Obama for the sanctions.

"They're planning hearings about it. They've been briefed," Camerota explained.

"Listen to what you just said: They're planning hearings," Spicer said. "They are trying to get it right. Listen to what's going on. Get the intelligence and then come to a conclusion."

"Wait a minute, Sean. They have stated they believe Russia is behind this, that's why they're holding the hearings," Camerota confronted Spicer.

"They believe something. Then they're having a hearing to get more information and coming to a conclusion. That's what we believe should happen," Spicer claimed.

Camerota was shocked asking again if President-elect Trump was even having a conversation about the possibility.

"I know it's frustrating for you that we're doing it in a logical way," Spicer condescended. No, we're going to get all the information, get briefed properly and make a decision. We're not going to put the cart before the horse."