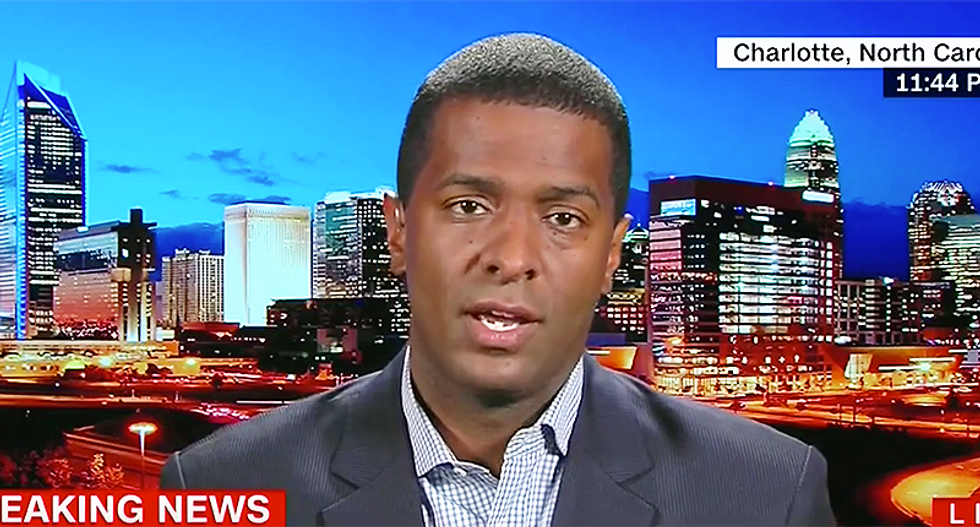 In a Tuesday night appearance with Don Lemon, Democratic pundit Bakari Sellers called out President-elect Donald Trump for his bizarre need to lie to the American people.

"That's going to be difficult for journalists and media to handle, even in press conference," he said." I think Kayleigh [McEnany] is right when she's discussing with Hilary the fact that he handles press conferences and media very well because he simply lies and it's our job to call him out. Today, in most recent tweet about the national intelligence agencies, he lied. He simply lied. Intelligence agencies had to come out and say there was no intention to meet today. They were always going to meet Friday."

McEnany tried to claim that those are unconfirmed reports because Trump is saying one thing and the intelligence community is saying another.

Lemon noted that there was a conversation with Dan Rather about Trump's "untruths" and the responsibility the press has for calling him out. "He said, 'call a lie, is a lie, is a lie,'" Lemon quoted.

"It's the truth," Sellers replied. "If you say something that's not accurate and misleading and intentionally say something you know not to be the case. It's a lie."

Sellers went on to explain, "Today when Donald Trump tweets out that the intelligence agencies were supposed to meet with him today, and it's somehow so-called just changed and sounds so strange to him and we found out that the intelligence agencies actually didn't say they would meet today, they would meet on Friday, that is a lie. I mean, this happens repeatedly with Donald Trump and we have to call it what it is. If that's how he wants to conduct the presidency and the press conferences, then so be it. It's the duty for everyone else to open their eyes and as Dan Rather said, 'call a lie, is a lie, is a lie."

McEnany tried to excuse Trump's behavior and question whether the intelligence community is telling the truth — but Sellers wasn't having it.

"More importantly, you repeated a Donald Trump lie a number of times, and I've had to correct you in the fact that Donald Trump quotes this African-American unemployment rate being 52 or 53 percent when we know that's not the case or the truth."

Sellers said that he doesn't mind calling what Trump says a lie when it is a lie.

The panel went on to cite many of the examples of the times Trump pontificated, was hyperbolic about something or even made up numbers or information that couldn't be substantiated. The conservatives on the panel tried to bring up President Barack Obama and the Clintons but Sellers always returned to the president-elect.

"Donald Trump lies and he lies compulsively," he said.

Check out the videos of the conversation below: