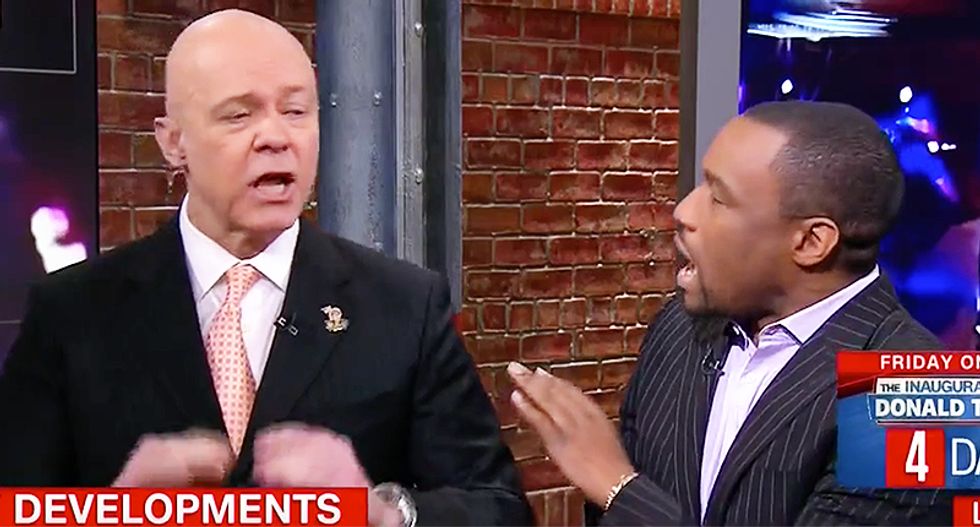 A conversation about race between a former police officer Harry Houck and Marc Lamont Hill turned into a shouting match on Martin Luther King, Jr. Day. The two discussed Northwestern University student Lawrence Crosby's recent lawsuit after his violent arrest for stealing his own car.

Hill began the conversation by explaining that he's been accused of stealing his own car multiple times. It is a frequently used tactic by police to arrest people of color, he explained. Police also say "stop resisting," Hill explained, so they can create a justification for the use of force.

Houck maintained that Crosby was, in fact, resisting arrest, but Hill asked how that could be possible when the man was holding his arms up outside of his car.

"Listen, it's the police officers lives that are in danger here," Houck claimed.

"How are they in danger?" Hill asked.

Houck went off on a generalization that police officers are killed in the line of duty all the time and that any situation is dangerous, therefore this situation was also dangerous. He went on to say that there was something in Crosby's hand, which resembled the key that is used to open up a knife. They were car keys, but Houck explained that it’s a threat to have anything in your hand.

Hill commented that the officers were beating him but Houck argued that it isn't beating someone when an officer is "punching him to make them submit."

Ultimately, the conversation turned to Hill, citing a Stanford study that followed officers and showed them reading African-Americans as older and more guilty than white counterparts.

"Did he take a poll?" Houck asked, refusing to acknowledge the study was legitimate compared to his 40 years as a police officer in the field.

Hill explained that the researcher is hired by police departments all over the country to find scientific solutions to problems.

"He thinks this," Houck said. "You can't just think this."

"Are you hearing what I'm saying?" Hill asked. Houck refused to look at him. "You think he took a poll then you don't understand. It is a study of actual police officers, real people with real science and real studies."

"I don't buy it," Houck maintained.

"I don't buy that, because I have experience out on the street," Houck.

Hill explained that the researcher is hired by police departments all over the country to help them work through issues like this using actual science.

Houck still refused to acknowledge that it was a legitimate study or that anything Hill was saying could be correct.

CNN host John Barman abruptly ended the interview and Hill sarcastically thanked them for the discussion. "This has been awesome," he said.

Aurora police showed a pattern and practice of racially biased policing, excessive use of force and “failing to record required information when it interacts with the community," according to the investigators, who were appointed by Colorado Attorney General Phil Weiser.