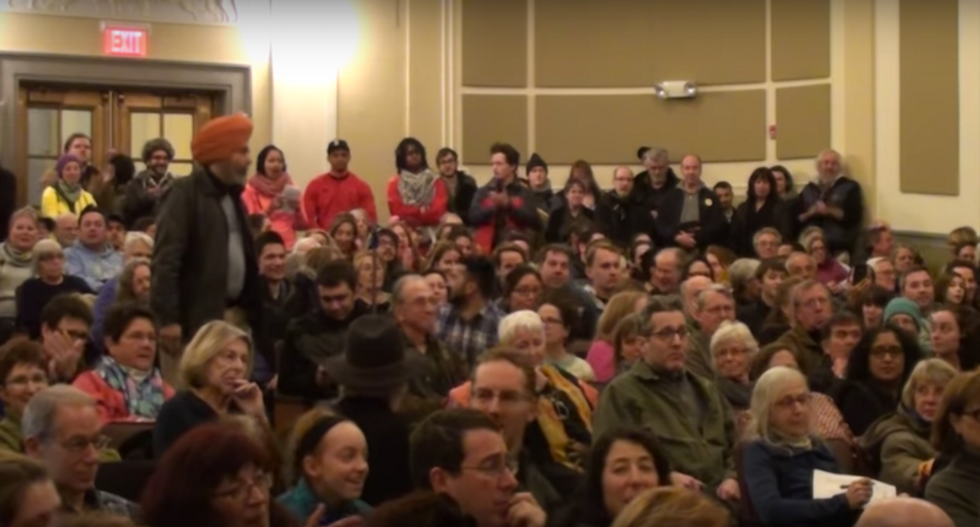 Whitehouse, along with 13 other Democrats, voted last Monday to confirm Trump CIA chief Mike Pompeo, who has promised to aggressively crackdown on whistleblowers rights and supports widespread NSA surveillance. Pompeo has also spoken in favor of the CIA's torture program.

The Senator's Sunday town hall was held in a Providence middle school auditorium, which reached capacity leaving an overflow of people to chant outside. They called for Whitehouse to come outside so he could address the group directly.

"You are entitled to an explanation of why I have voted for some of the defense nominees and I will concede right off the bat that I may have been wrong," he told the crowd. Whitehouse did eventually make his way outside where he addressed the large group of people with a megaphone. He was greeted by a crowd that chanted "Just say no!" and "Obstruct!"

"Why did I vote for Pompeo?" Whitehouse asked, as people shouted, "Torture is a crime!" He continued, "I think that there are a lot of you who may disagree with me on this, and I appreciate it," he said. "Sometimes I feel pretty confident, sometimes you have to make a judgment call. He was a Rubio guy."

"Sometimes you need to be in a position to say no if something really, really significant happens," Whitehouse said, as someone shouted over him, "You supported a torturer!"

The crowd wasn't pleased with his response, calling on Whitehouse to block all future appointments. They called on him to oppose Trump's education secretary pick, Betsy Devos. "You can't normalize these appointments!" one person yelled.

"When Pompeo tortures, we'll be back," a protestor declared.

The demonstration was caught on video, which you can watch below.