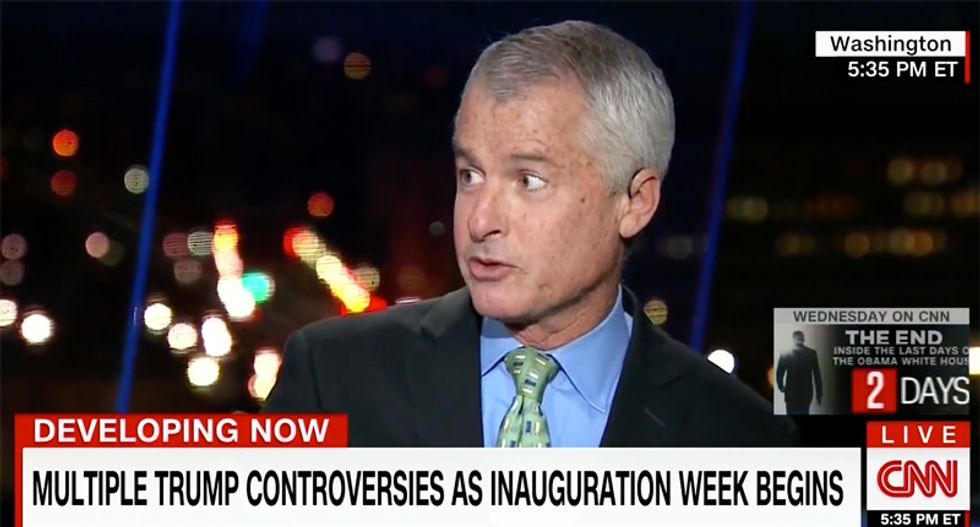 Appearing on CNN's The Situation Room, former CIA counterterrorism official Phillip Mudd said Trump seems to 'have a thing about the CIA" that could be a problem for incoming head, Rep. Mike Pompeo (R-KS).

Referring to out-going director John Brennan's battle with Trump, which led to the president-elect of accusing Brennan of leaking "fake news," Mudd said Pompeo could face a revolt.

"It seems like he's got a thing for the CIA, " Mudd began. "I think Brennan has him possibly outfoxed here. Let's play the role of a CIA officer, I spent 25 years with them. So now John Brennan puts it out on the record, when the president-elect criticized the CIA, the CIA director comes out to object. What happens if there is a tweet after the incoming individual, Mike Pompeo, who's going through confirmation hearings now, if he comes through, if the president-elect starts tweeting then? The work force will say, and they're not a subtle workforce, they're going to say "You going to get out and talk to him? The previous director did."

"The leadership of that organization, what we call the 7th floor, will walk in face to face to Mr. Pompeo and say, We expect you to issue a statement," Mudd continued.

Asked by CNN regular Gloria Borger, if Trump is "setting himself up to be undermined by the CIA," Mudd replied, "This is all about branding."

"Let's be simple here. What he's setting himself up to do is -- the CIA has a deep organization. Five days in the president-elect, after he becomes president with his new director, is going to say, 'Look, Mike Pompeo transformed the place," Mudd explained, before warning, "I can tell you the CIA doesn't get transformed, that culture doesn't get changed."

Commentator David Axelrod concurred, saying, "If the president-elect as president continues this kind of rhetoric what's going to happen is you'll have a mass exodus of very experienced people from the CIA and it will endanger the country."

The FBI and law enforcement community has been warning of an increase in domestic terrorism for several years. During former President Donald Trump's administration, funding in dealing with it has remained unmatched to international terrorism.

"We elevated to the top-level priority racially motivated violent extremism so it's on the same footing in terms of our national threat banding as ISIS and homegrown violent extremism," said FBI Director Christopher Wray, speaking to Capitol Hill Feb. 2020.