Ex-CIA operative rips Trump spokesman on Russian hacks: 'What the hell is that dude talking about?' 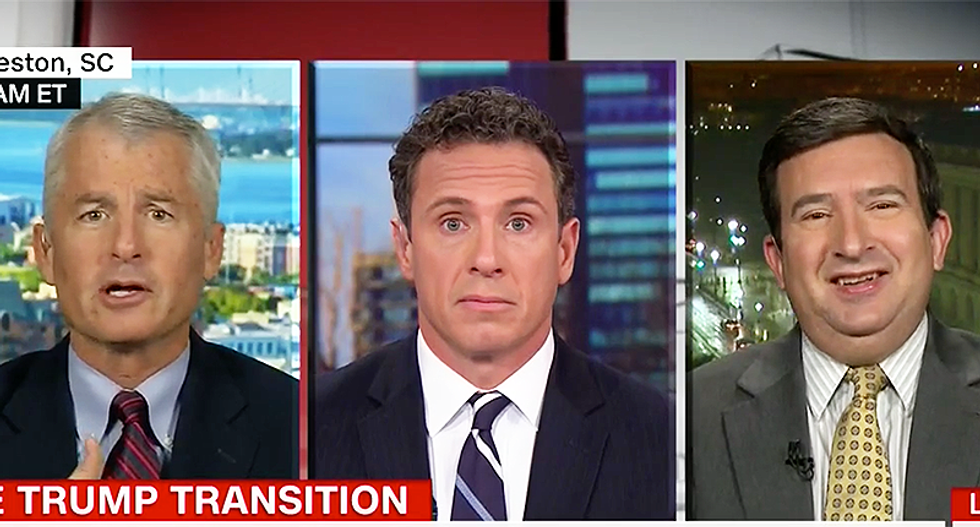 Former CIA operative Phil Mudd and counterterrorism expert Daveed Gartenstein-Ross from the Foundation of Defense of Democracies attacked Donald Trump's spokesperson Sean Spicer on Tuesday morning's "New Day." Spicer attacked CNN host Alisyn Camerota in a Monday interview, asking why the media was jumping to conclusions that it was Russia.

CNN host Chris Cuomo referenced Spicer and asked if there was anyone in the intelligence community that doubted the reports. Mudd said no one doubts them.

"What the hell is that dude talking about?!" Mudd exclaimed. "His boss has come out and already drawn conclusions and said I don't believe them. Meanwhile, on the other side, Republicans and Democrats in Congress and the intelligence community have come out and said with high confidence we say that the Russians hacked information related to the elections. I agree with the judgment and it's not clear why they did this or that this had anything to do with swaying the election, but to say either from the Trump camp or from the government camp that we don't know what happened and we're going to wait for the report, do we ignore history here? I don't get it, Chris. This is ridiculous."

Trump has refused to take an intelligence briefing on the Russian hack, but told the press that he would sometime this week.

Mudd explained that if you go into a murder investigation you look for fingerprints but in digital crimes you look for digital indicators that are similar.

"We've seen reporting, some of the hacks were seen in real time," Mudd explained. "They didn't just gather fingerprints after the event. They were watching Russian entities or people hired by the Russians during the event. This combination of factors, passwords, language, code allowed them to go back and say we've seen this before. This is the Russians."

Gartenstein-Ross said that it isn't unusual to see the intelligence community be a little cryptic in talking about what is found. Cuomo noted that often they don't want to give up sources or methods because it reveals a lot about how they conduct investigations.

"You, of course, have two different things going on here," Gartenstein-Ross began. "One of which is that digital forensic analysis is an imperfect science. That is, you could have false flag that are built into code, for example. These are things that the Trump team are pointing to. That being said, that's just part of the medium. It's difficult to have absolute certainty in the digital sphere."

Gartenstein-Ross explained that having an incoming president disagreeing with the intelligence community is incredibly dangerous because often decisions must be made quickly. He also went on to attack Trump's new national security advisor Lt. Gen. Michael Flynn for his history of attacking the intelligence committee.

"The second thing that's going on is you have distrust of the intelligence community for key members from the Trump team," Gartenstein-Ross said. "Mike Flynn was forced out for a variety of reasons, one of them is he disagreed with other members of the intelligence community and the consensus on certain issues, including Al Qaeda's comeback. You have some distrust and belief that intelligence has been politicized under the Obama administration. In terms of internal processes, there's no red flags for me."