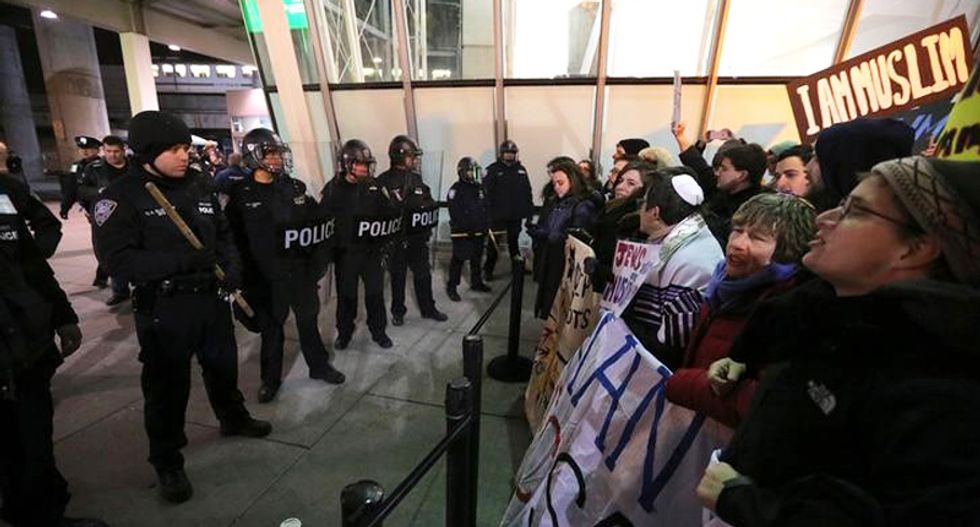 After immigration agents detained two Iraqis on Saturday at New York's John F. Kennedy International Airport, their lawyers and two U.S. representatives accompanying them tried to cross into a secure area - and were stopped themselves.

"Step back! Step back!" the agents shouted at them.

A few minutes later, Heidi Nassauer, chief of passenger operations for U.S. Customs and Border Protection (CBP) at the airport, was called over.

Representatives Jerrold Nadler and Nydia Velazquez, both Democrats from New York, wanted clarification on whether an immigration ban issued on Friday by President Donald Trump prevented the Iraqis from consulting with attorneys.

Nassauer had no clear answer.

"We are as much in the dark as everybody else," said the border protection official at one of the largest U.S. airports.

The tense exchange, witnessed by Reuters, was representative of the confusion at airports across the United States and others overseas after Trump abruptly halted immigration from seven majority-Muslim countries and temporarily put a stop to the entry of refugees.

Throughout much of Saturday, government officials and security workers were left to guess who from those countries could enter the United States legally and who could not.

The day ended with a federal judge issuing an emergency stay that temporarily allowed stranded travelers with valid visas to remain in the United States. The American Civil Liberties Union, which sought the stay, said it would help 100 to 200 people with visas or refugee status who found themselves detained in transit or at U.S. airports.

Earlier on Saturday, the Trump administration said it would have been "reckless" to brief government agencies and airports more broadly in advance of launching the security measures, which it says are aimed at preventing attacks from foreign groups.

But career officials in the Homeland Security and State departments told Reuters the administration failed to appreciate the complexity of enforcing the order consistently or the need to prepare agencies and airlines.

Affected travelers had varying experiences at different airports, according to nearly 200 accounts gathered by the American Immigration Lawyers Association (AILA).

Many holding visas told the association they were allowed into the country without a problem despite Trump's executive order banning them.

But some lawful permanent residents – those with so-called green cards – were turned away despite guidance to airlines from the CBP that they should be allowed to travel.

At about 10 p.m. on Friday in Seattle, some eight hours after Trump signed the executive order, an Iranian with dual Canadian citizenship from Vancouver was sent back to Canada, the traveler reported to AILA. A half hour later in New York City, an Iranian arrived at JFK and entered the United States on a valid visa without any problems, according to AILA.

"There's a very strong nexus between our immigration and visa programs and terrorist plots and extremist networks inside the United States," the official told reporters in a briefing. "It would be reckless and irresponsible to ... broadcast to the entire world the exact security measures you're going to take."

Key figures at the Department of Homeland Security were informed, the official said, declining to elaborate.

"I’m not at liberty to reveal exactly who was briefed and who wasn’t briefed, but everyone that needed to be briefed was briefed," the official said.

OUT OF THE LOOP

At the State Department, one of the main agencies dealing with visas and immigration, most officials first heard of the executive order on immigration through the media, according to two department officials.

While some offices were aware an executive order was coming, there was no official communication or consultation from the White House, they said.

"Was there any inter-agency coordination or consultation? No,” said one senior official, speaking on condition of anonymity.

Immigration enforcement is among the federal government’s most complex endeavors, involving seven agencies from the U.S. Coast Guard and CBP to the State and Justice Departments.

Two senior officials in the Department of Homeland Security said on Saturday that they had not heard of any officials in the relevant agencies - or the congressional committees and subcommittees that oversee them - who had been consulted by anyone who helped draft the president's order.

"If the result is confusion and inconsistency, the responsibility all lies at one address," said one of the officials, referring to the White House.

The official, like others, requested anonymity to discuss Trump's order.

Another Homeland Security official told Reuters that the White House worked on the executive orders with “limited department participation.”

“It has been a challenge but folks are working through it," the official said.

One of the Iraqis detained at JFK was Hameed Khalid Darweesh, a 53-year-old Kurd who had worked as a U.S. Army translator in Iraq and had been threatened there for helping the Americans.

Visas for him and his family were finally issued on Jan. 20, according to a lawsuit filed on behalf of Darweesh and another Iraqi, who had also worked with U.S. military. But as soon as he landed at JFK, he was detained by CBP officers and barred from contacting his attorneys.

When his attorneys, from the International Refugee Assistance Project, asked the CBP officers whom they could contact, the agents responded, “Mr. President. Call Mr. Trump,” according to the lawsuit.

Eventually, Darweesh was allowed to leave and met the lawmakers and his lawyers, clutching his passport and weeping with joy. The other Iraqi who was detained, Haider Sameer Abdulkhaleq Alshawi, was also allowed to enter the country.

But dozens of others were less fortunate.

Conflicting media and government reports caused confusion for airlines struggling to deal with the order.

CBP informed air carriers about the executive order in a conference call late on Friday, said a person familiar with the agency's communications. CBP then sent written guidance before noon on Saturday saying that green card holders were "not included" in the ban and could continue to travel to the United States. The source said airlines were allowing travelers with green cards on flights until told otherwise.

The Trump administration official later told reporters that U.S. green card holders traveling outside the United States need to check with a U.S. consulate to see whether they can return.

"It's being cleared on a case-by-case basis,” the official said.

The green card issue has left immigration attorneys confused about how to advise their clients. Attorney David Leopold, from Cleveland, Ohio, said he is erring on the side of caution, advising his clients to stay in the United States to avoid being stranded abroad.

That can create some agonizing dilemmas.

"A Syrian doctor who has a dying mother in Europe cannot go visit her not knowing that he will be able to get back into the United States,” Leopold said.

Season 5 of MTV's hit reality TV show Are You the One? is the only season in the show's history where the contestants went home without a cash prize. In an interview with The Daily Beast, nine of the show's contestants say production company Lighthearted Entertainment rigged the show to make sure they wouldn't win in hopes of making the season more dramatic and prompt MTV to sign on for another season.

Democrats refuse to take advantage of the GOP civil war -- do they care about democracy?

On the eve of her defenestration, Rep. Liz Cheney, R-Wyo., gave a fiery speech on the House floor Tuesday night about the dangers of embracing Donald Trump's fascist coup-centric approach to politics.

As noted by Newsweek White House reporter Elizabeth Crisp, McCarthy's campaign sent out an auto text message to supporters after the bipartisan infrastructure meeting ended in which he accuse Biden of pursuing a "radical Socialist agenda."