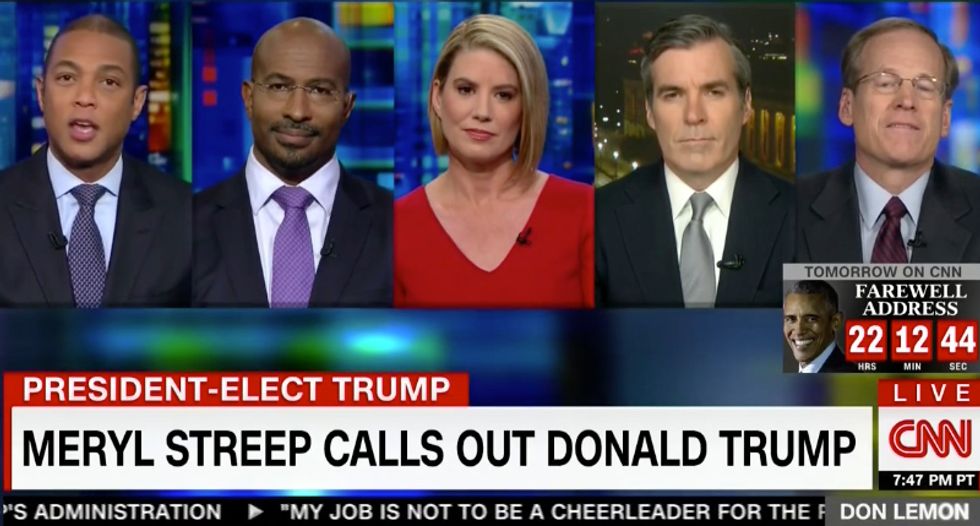 It began after Republican consultant Kevin Madden asserted, "A lot of people on my side of the political prism did not like the speech. I think it's a cliche right now for someone in Hollywood to stand up and criticize somebody who's a Republican. I do think there was -- there definitely were some heartfelt moments in the speech, it resonated with that particular audience. There were things that seemed out of touch with Middle America, saying that without them, all we would have is football or MMA. This is something that I think continues to sort of demonstrate the red state, blue state divide we have."

"I agree the MMA stuff was a bridge too far, I didn't see her as being a victim," panelist Van Jones added. "I saw her as standing up for victims. and using her strength to come to the rescue of people who maybe feel vulnerable. I do think this idea of, if only the Hollywood elite would sit down and be quiet, the Republicans would be happy. I just think that some Republicans, they want to feel victimized by the Hollywood elite."

"Hold on, this whole elite thing. What are we talking about with elites?" Lemon interjected. "Donald Trump is a self-proclaimed multi-billionaire. Most of the people in his cabinet are billionaires, it's probably they're richer than --."

"Why are we using this term elites to apply to a certain group of people, when aren't elite people just wealthy people who have privilege? That could apply to a lot of people, not just liberals," Lemon continued.

Jones picked up the line of thought from Lemon, pointing the finger at the entire panel.

"It's a level of hypocrisy on this point that is just almost laughable," Van Jones remarked. "In that everybody on this -- here tonight. We spend our lives trying to influence public opinion. For some reason when Hollywood people do it, well known celebrities and artists do it, some of the most recognized Americans do it, those people are terrible because they're telling us what to do. Well, we're all telling people what to do, and we're all telling them what to think."