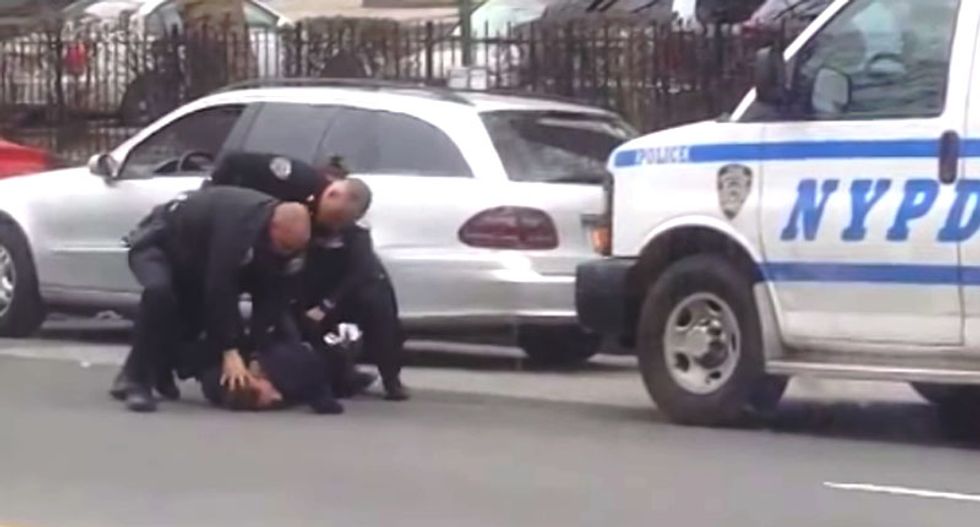 NYPD officers were caught on video beating and slapping a man while restraining him on the morning of New Year's Eve in the city's Bronx borough, Gothamist reports. The incident is now under investigation.

Alexis Jasmin was on the bus when she caught the confrontation from the bus window. Jasmin uploaded the video to Facebook, writing that she witnessed the incident while on her way to the hair salon. "This man was already in his car and the police were in the van getting ready to pull off," Jasmin wrote.

"Granted the man did stick his head out the window and say a few choice words. But please tell me why the cops got out the van, snatched him out of his car and proceeded to do this to him," the post continued. "Please explain to me why the officer kept bashing his face like that. This is exactly why i (sic) hate the police. His hands were already tied and he kept hitting the man in the face until bloody."

The video showed three officers — two male and one female — pinning the man on the ground. One of the male officers then starts punching and slapping the man in the head. The officer then pushes the man's head against the street. The officers pulled him up and held him against the NYPD van, as the bus pulled away.

According to the report, the NYPD did not confirm the man's identity or the status of his arrest. "The matter is under internal review," said a spokesperson for the department.

You can see the full video below. (Warning: Graphic content, police violence.)