'I didn’t want to fly under false colors': Former CIA director explains why he broke with Trump 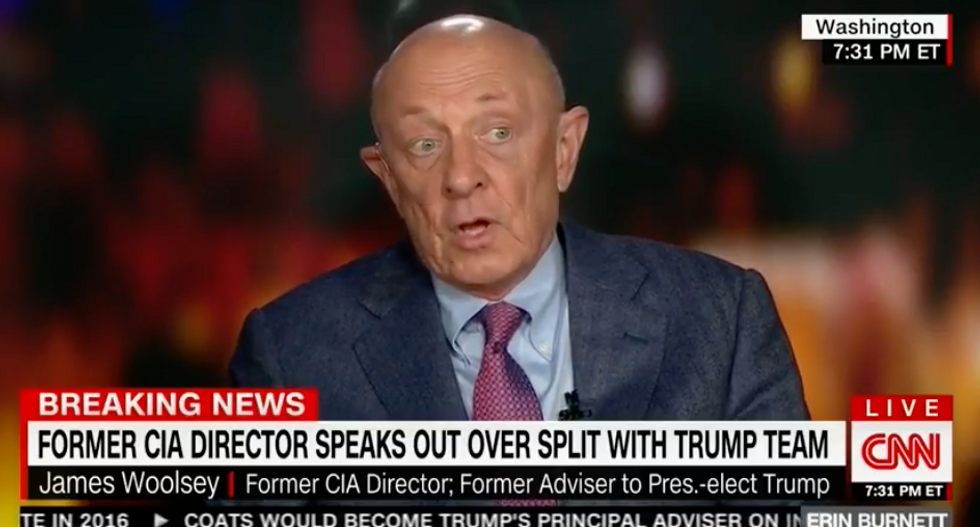 Former CIA director James Woolsey, who previously served as a senior advisor to Donald Trump, explained his decision to distance himself from the president-elect Thursday, telling CNN’s Erin Burnett he “didn’t want to fly under false colors.”

“I’d been an advisor and felt like I was making a contribution and I strongly support Mr. Trump for president—did since early September—and I wish him well, but I’m not really functioning as an advisor anymore,” Woolsey said.

Woolsey insisted he came forward with his decision because cable news anchors would frequently label him as a Trump advisor while interviewing him. “I thought I should strike that from the chyron so nobody is under false impressions,” he said.

Woolsey insisted there wasn’t a “particular point” where he stopped advising Trump, adding he “was pleased to be included” in the transition process. But, he said, given “the [cabinet] selections have largely been made,” he doesn’t “want people to get the impression I’m claiming I’m something I’m not.”

Pressed by Burnett if Woolsey’s move was related in part to Trump’s refusal to accept the intelligence community’s consensus that Russia hacked the U.S. election to help Trump win, the former CIA directory acknowledged it’s clear Russians were involved in more of a “control mode than just a participation mode.”

But, he insisted Trump is a very different person in private than when he is in front of “50,000 shouting millennials” and putting on what Woolsey called his “shtick.”

“He has a very different demeanor when he’s talking to a couple to three people. It’s very reasonable, and quite ordinary—normal,” Woolsey said, adding he doesn’t share Vice President Joe Biden’s sentiment that the president-elect needs to “grow up.”