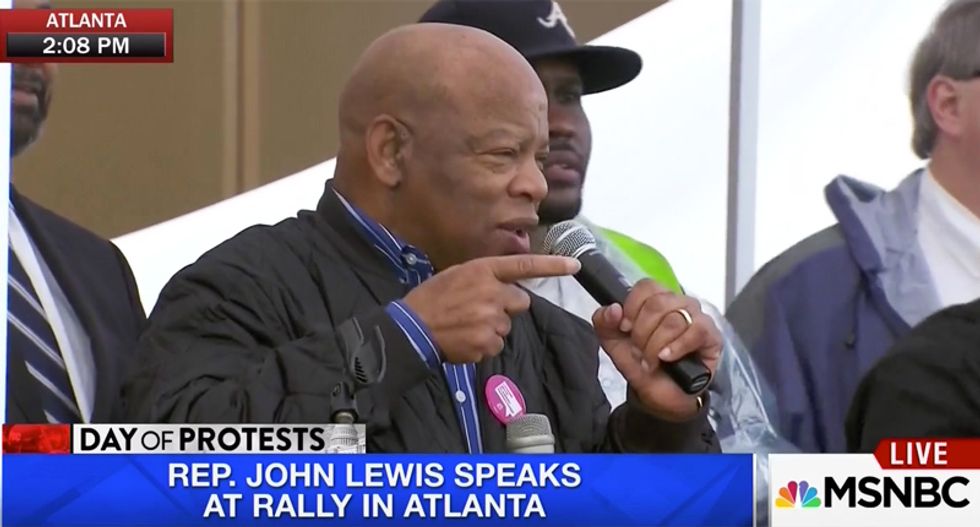 Civil rights icon and Congressman John Lewis (D) wowed a hometown crowd Saturday afternoon, speaking at Atlanta's March for Women and tellingare doing the same type of work he did in the 60's to register African-Americans in the south to vote.

Lewis, who has been harshly critical of President-elect Donald Trump, questioning the legitimacy of this election in light of Russian involvement, told the massive crowd that it was "unbelievable" how many people showed from Fulton County to let Trump know they will not be silenced.

"Sometime, you have to turn things upside down instead of right side up when you see something that is not right, not fair, not just, you have a moral obligation, a mission, and a mandate to say something, to do something. we cannot afford to believe silent. now," Lewis told the crowd. "I just want to thank you. You look so good. This is unbelievable, there's hundreds and thousands of people, I tell you! I want to thank you for standing up, for speaking up, for getting in the way, for getting in trouble, good trouble, necessary trouble."

After being interrupted by chants of "We love you John," Lewis got down to the heart of the matter.

'I've come here to say to you, don't let anybody, anybody turn you around. And never, never ever give up, never lose hope," he said to cheers. "Look, we're fighting for our sisters, for our mothers, for our daughters. But we're also fighting for our brothers, for our sons, for those who are not able to stand up and fight for themselves. We have a moral obligation to fight, so never ever lose hope. You know, in my younger days, I got arrested and went to jail 40 times. Since being in Congress, another five times, and I may get arrested and go to jail again."

Watch his speech below via MSNBC: