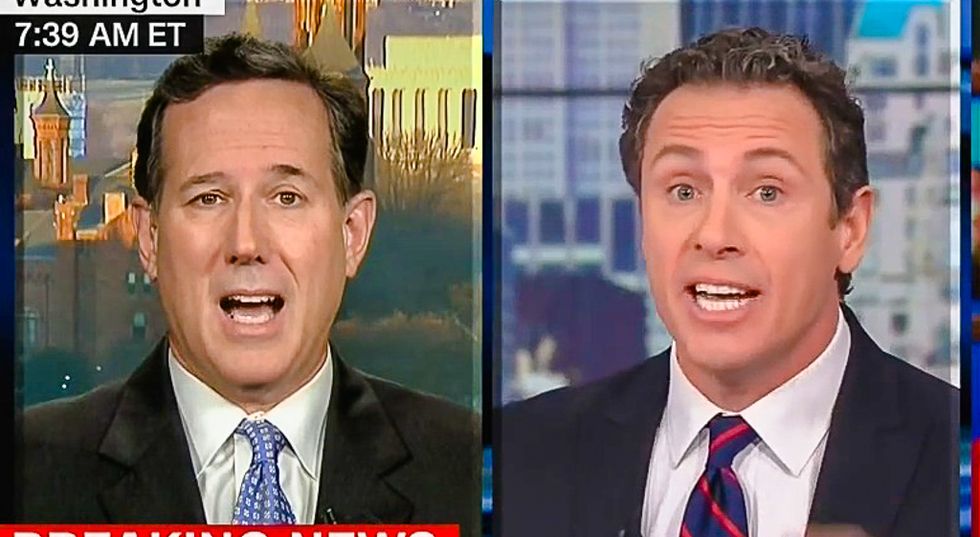 In a tweet Wednesday morning, Trump promised a "major investigation" into voter fraud following his assertion this week that he lost the popular vote because 3 to 5 million people voted illegally.

"His basic notion is a lie," Cuomo began. "There's no proof."

"I think what we're looking at here is the potential for fraud -- and it is vast," Santorum opined.

"That's not what he said," Cuomo interrupted. "He doesn't say potential. He says, between 3 and 5 million voted illegally and that's why I lost the popular vote."

While Santorum disagreed with details of the president's assessment, he said, "I do agree that it's possible there was large scale voting fraud."

Santorum cited New York City's Department of Investigation, which launched a scam voting operation in 2013 and was able to cast 61 votes using the names of dead people.

"The idea that this wouldn't happen or couldn't happen -- and that's really the important part -- that this couldn't happen on a large scale is ridiculous," the former Republican presidential candidate continued. "Because we have law in places in states which allows people who are dead, who have moved, who are illegal or whatever to remain on the voter rolls and that potential for fraud is real."

"But nobody is arguing that," Cuomo shot back. "That's not what the president is saying. He's saying, I lost because 3 to 5 million people -- just like those people celebrating after 9/11 -- that's what took it away from me. And it's a lie... It's a dangerous lie because if people try to validate an untruth like this, where does it lead us when the truth matters to the American people over time, whether someone attacked us, what the numbers of dead are abroad, what the reality of our economic situation? If he'll lie about something this small, what does it mean later?"

"Rick, I've got to tell you, to a certain extent, you're encouraging the problem here," the CNN host argued. "Because you're redefining the issue to make it more acceptable. 'Well, there is voter fraud. Well, we do have to look at it.' That's not what he's talking about and you know that."

Santorum disagreed: "They are legitimate things to investigate. We do need to clean up our voting process."

"You want to talk about someone lying," Santorum quipped. "You had [President Barack Obama] in his press conference, [he] said, 'These voter ID laws are out of Jim Crow.' Jim Crow had nothing to do with voter ID. It was a poll tax. I mean, this is ridiculous. The bottom line is we do need voter ID in this country."

"I have a lot of respect for you," Cuomo replied. "But you did excuse it, right. I came back at your to make you talk about this specific issue and then you said it. But your inclination was to defend it by deflecting it into something more simple."

"There's no study that's ever been done that suggests you have 3 to 5 million vote illegally in this country," he added. "They have proven exactly the opposite."