Jeffrey Lord: No one cares if Trump pals around with ‘shady characters’ because he needs to fight ISIS 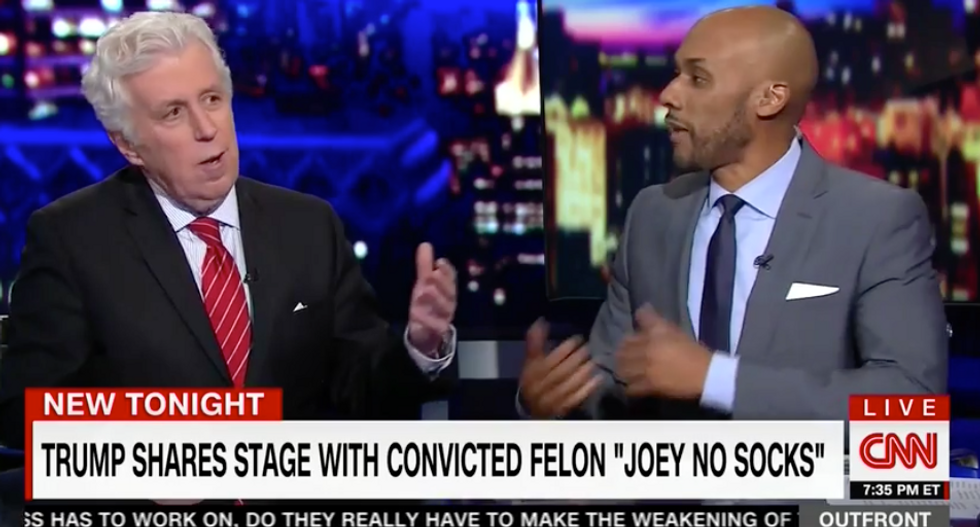 Lord insisted Trump is the kind of person who “If he meets you for ten minutes, he’s going to be a pretty loyal guy to you,” before arguing that the president-elect palling around with a “small-time mobster" pales in comparison to what president before him have done.

“A convicted drug smuggler was there in the Clinton White House posing for a Christmas party picture with Hillary Clinton shortly after he gave money to Al Gore for the 2000 race,” Lard argued. “And we can get well into the CIA and Sam Giancana sharing a mistress with the President of the United States, this isn’t even close.”

Liberal commentator Keith Boykin countered that Trump ran on a platform that promised to operate in a new way.

“Did we not just have an election in November where a certain guy named Donald Trump said that he was going to ‘drain the swamp?’” Boykin asked. “That he was going to get rid of all the shady business dealings? And now you’re excuse is, ‘everybody does this so it’s not a problem?’ That’s the worst argument.”

Boykin added that the move speaks to Trump’s judgment, arguing it shows the president-elect is surrounding by “yes men.”

“Somebody should tell him, ‘Don’t meet with convicted felons on New Years Eve, don’t tweet everyday,’” Boykin argued. “Somebody needs to tell him not to suck up to Russian dictators and CEO’s who want to curry his favor.”

Host Erin Burnett pointed out that one of the problems with Trump hanging out with Cinque is that the president-elect frequently denies knowing the convicted felon well. Burnett played a clip of Trump praising the former mobster, noting: “Either he speaks that glowingly of somebody he doesn’t know at all—which is his own issue—or he knows him.”

Boykin argued of course it matters that Trump is corresponding with criminals, noting the president-elect “has a history of dealing with shady people.”

“Why does he have time to meet with Don King and Joey No Socks instead of having intelligence briefings?” Boykin argued.

“We litigated all this kinds of stuff in the campaign,” Lord countered. “It’s over my friend.”