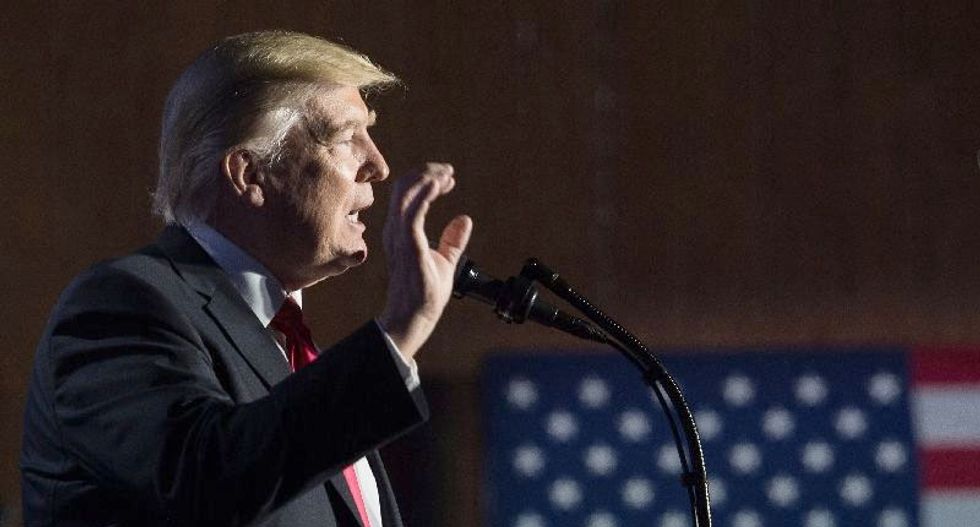 US President Donald Trump speaks to the staff at the Department of Homeland Security in Washington, DC, on January 25, 2017 (AFP Photo/NICHOLAS KAMM)

Declaring illegal immigration "a clear and present danger to the interests of the United States," one order seeks to halt what it called a "recent surge" of illegal border crossings, crack down on potential acts of terror, reduce the operability of transnational criminal organizations, and speed the removal of those living illegally in the country.

Here are key points of both orders, one entitled "Border Security and Immigration Enforcement Improvements," and the other on "Enhancing Public Safety in the Interior of the United States."

Trump's go-to campaign declaration is at the heart of his border security order, which calls on the Department of Homeland Security "to immediately plan, design, and construct a physical wall along the southern border" with Mexico.

The exact composition of the wall remains in question. The order defines it as "a contiguous, physical wall or other similarly secure, contiguous and impassable physical barrier."

Authorities are also ordered to "allocate all sources of federal funds" for the wall. Trump has promised that Mexico would eventually be made to reimburse its cost.

Trump wants to intensify efforts to stop new arrivals as they cross into US territory, and speed the repatriation of those who recently entered.

The orders call for the hiring of 5,000 additional US Border Patrol agents.

They require a termination of the practice known as "catch and release," whereby migrants are sometimes released in the United States shortly after their apprehension for immigration law violations.

Amid a backlog of cases, immigration judges are to be "immediately" assigned to detention facilities for the purpose of speeding judicial determinations about new arrivals and whether they should be allowed to stay as asylum seekers.

Authorities are also to ensure that illegal immigrants "are returned to the territory from which they came pending a formal removal proceeding."

Trump wants to deport those who have committed crimes.

But the orders also prioritize the expulsion of those who have been "charged with any criminal offense," not just those who have been convicted; have fraudulently received public benefits; have misrepresented themselves to a government agency; or who otherwise are deemed by an immigration officer to "pose a risk to public safety or national security."

The documents call for the hire of 10,000 additional immigration officers to adjudicate cases including deportation.

A handful of US localities termed "sanctuary cities" have created protections for undocumented immigrants. Some 300 such places, which actually comprise cities, counties or states, have vowed to protect the estimated 11 million undocumented migrants living in the country.

But Trump and other Republicans argue these locales pose a danger and want to abolish them.

To that end, Trump's order would empower state and local law enforcement agencies across the country to "perform the functions of an immigration officer in the interior of the United States to the maximum extent permitted by law."

Jurisdictions that wilfully refuse to comply are barred from receiving federal grant money.

The Homeland Security and State departments are ordered to base their diplomacy and negotiations with countries in part on whether those nations accept back their citizens who are deported from the United States.

Those that do not are to be designated "recalcitrant countries," and slapped with punishments that include restrictions on US immigrant and non-immigrant visas.

Trump, who made several campaign speeches in the presence of relatives of Americans killed by undocumented immigrants, has ordered the creation of the Office for Victims of Crimes Committed by Removable Aliens.

US government agencies will also bar undocumented persons from protections of the Privacy Act which guards personally identifiable information.

The orders also require government agencies to provide quarterly reports on the number of undocumented immigrants detained in federal and state prisons and local jails.