Kimmel mocks Trump's first day in office: 'Instead of the CIA he should be talking to a CI-psychiatrist' 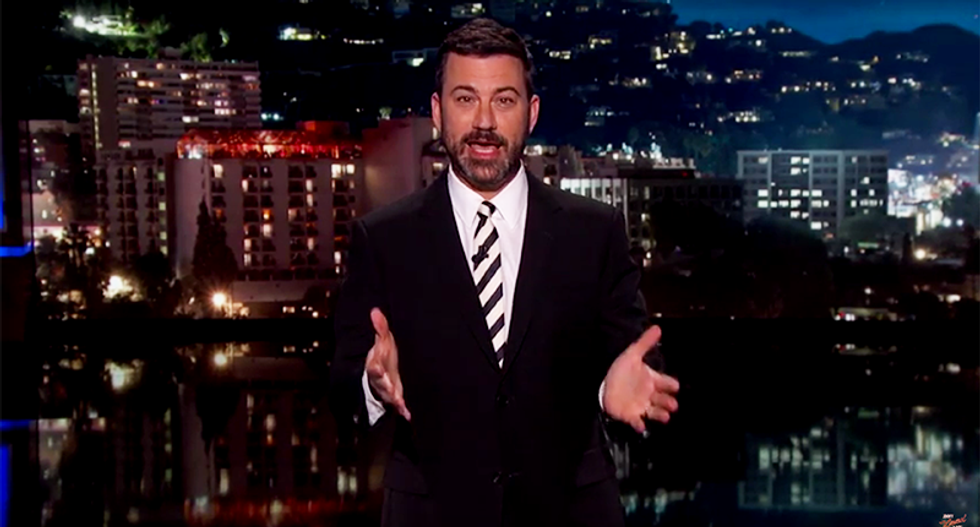 Late-night host Jimmy Kimmel had then-candidate Trump on his show, but after watching the new "celebrity a-president" Kimmel was quick to knock the missteps over the weekend.

"He went to the CIA to make nice after repeatedly insulting them on Twitter. He called them the Central 'Intelligence' Agency," Kimmel said putting "intelligence" in quotes. "And [he] compared them to Nazis, which is the kind of thing that upsets people." Trump then blamed the rift with the CIA on the media.

Kimmel explained that Trump spent a portion of his speech discussing the crowd at his inauguration. "He's so focused on size — nobody asked him about that, by the way. He brought it up. He's focused on the size of his crowds, the size of his ratings, the size of his hands the size of, well, everything. Again, he's supposed to be there to make peace with the CIA but he couldn't help himself... Instead of the CIA he should be talking to a CI-psychiatrist."

When it comes to Trump's crowd size, Kimmel said that Trump was so mad he made press secretary Sean Spicer gather the press to yell at them. Kimmel said he was showing a clip of the press conference, but instead showed a clip of a North Korean official yelling into a microphone.

When it came to Kellyanne Conway's use of the now notorious phrase "alternative facts," Kimmel confessed he wished he knew that was an option when he was in school. That way, he'd have had all A's.

Kimmel then mocked Trump's problem with spelling in his tweets. "Maybe it's an alternative spelling," he said about Trump misspelling honor as "honered."

The host then went on to explain how he won an Olympic medal, has letters of endorsements from ex-lovers and he has the largest penis ever recorded