Lewis Black: All the drugs I’ve taken never prepared me for the bullsh*t and insanity of a Trump presidency 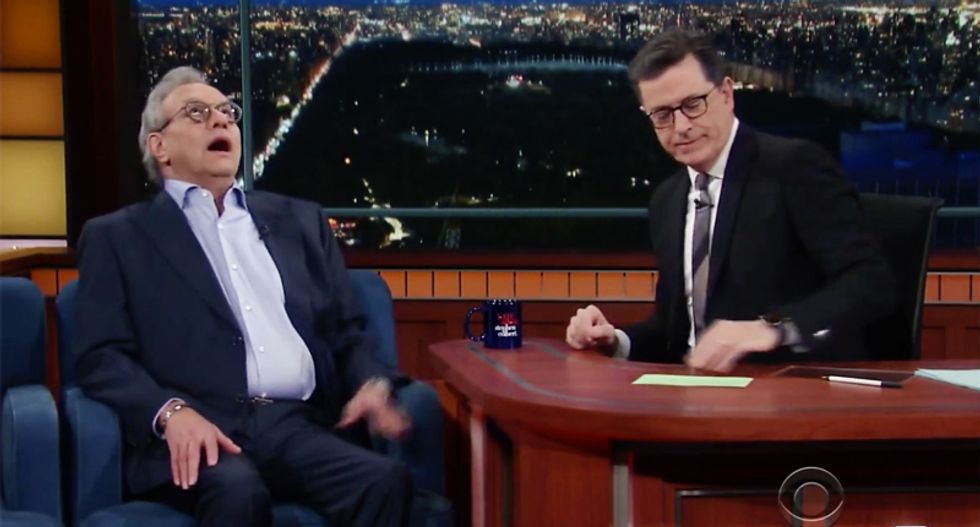 On Monday night Late Show host Stephen Colbert was joined by an old buddy from The Daily Show, comedian Lewis Black, and the two spent the next seven minutes marveling at the mind-boggling idea that Donald Trump is actually the President of the United States.

Colbert got right down to it.

"I have seen you angry through four presidential administrations," the CBS host began. "Is there anything unique about your present level of anger with the Trump administration?"

Lewis responded by rolling his eyes back in his head and staring at the ceiling before answering.

"I did a lot of hallucinogens when I was younger in order to prepare me for any eventual reality, and I never saw this one coming," Lewis eventually responded.

"Well, let's talk about some specifics here because it's been theory up until this past week and now we're into the reality of it," Colbert replied. "What do do you make of the immigration ban?"

"You know what's interesting is to see them, to watch them -- the amount of energy it must take for these people to turn bullsh*t and insanity and meanness and make it look reasonable. How do you do it?" Lewis replied. "Something I should have said at the top -- when you show this later -- this is live to tape -- pixelate my face and make my voice fake, because I don't want that big baby yelling at me."

Turning to Trump's assertion that millions voted illegally, Lewis broke down the absurdity of the accusation.

"First off, less than half of the American people voted," Lewis explained. "People don't like to vote. If they don't like to vote, why would you think they would like to then commit voter fraud? You can't even get them into the booth!"

Lewis then elaborated with a cheating voter scenario.

"You know, running around town and stopping in at shops to have a little lunch before they cheat some more! Helping the economy out," he said as he rolled his eyes