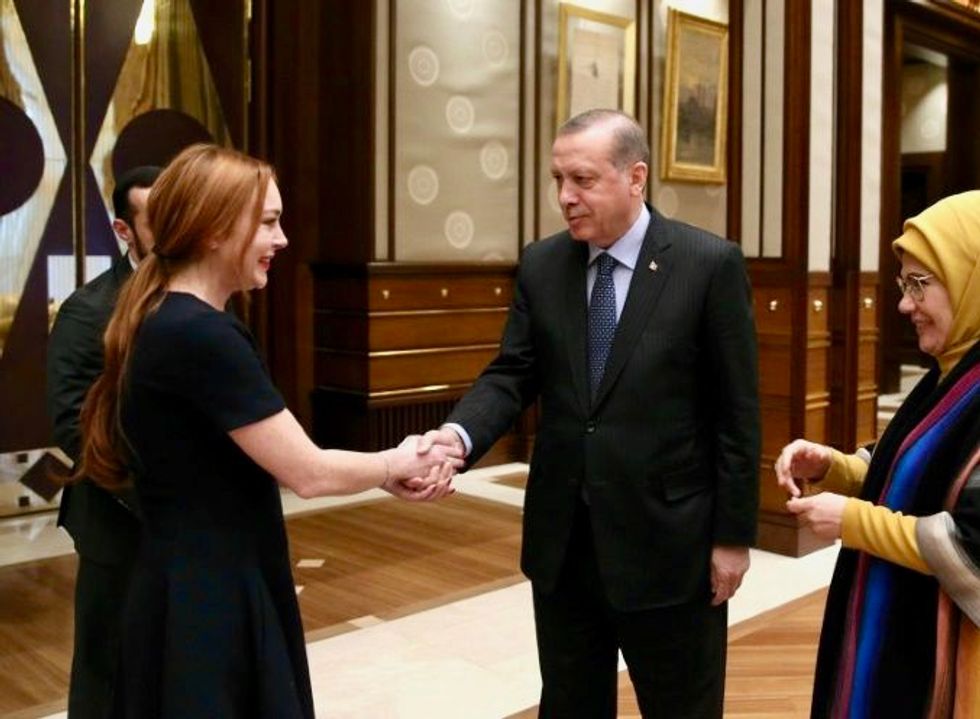 US actress Lindsay Lohan (L) shakes hands with Turkish President Recep Tayyip Erdogan (C) and his wife during a visit at the presidential palace on January 27, 2017

In a picture taken at the presidential palace, a smiling Lohan is standing next to Erdogan, who is embracing Bana, and his wife Emine.

Bana shared a short video on Twitter, in which Lohan says: "We want to send to all of the people in Syria and Aleppo suffering, and to all the refugees, we are here supporting you and you can hang on and be strong. Just like Bana has."

The US actress gave light-blue badges to Erdogan and his wife, bearing a quote from the Turkish leader: "World is bigger than five," according to Anadolu.

The quote is a reference to the UN Security Council's five permanent members -- Britain, China, France, Russia and the United States.

Bana came to international attention with her tweets giving a tragic account of the war in Syria's flashpoint city Aleppo, whose rebel areas fell back into government control last month.

She was evacuated from the besieged city to Turkey in December, and later that month she and her family were given the rare honour of being hosted by Erdogan at the presidential palace.

Sharing the picture on her Twitter account, Bana wrote: "Meeting with my friends , Emine and to support the people of Syria."

Lohan, a former child star who appeared in hit films "The Parent Trap," "Freaky Friday" and "Mean Girls", has struggled with drug addiction and has had numerous run-ins with the law.

The troubled actress was sentenced in 2013 to 240 hours of community service for reckless driving and lying to police following a 2012 car accident in Santa Monica, California.