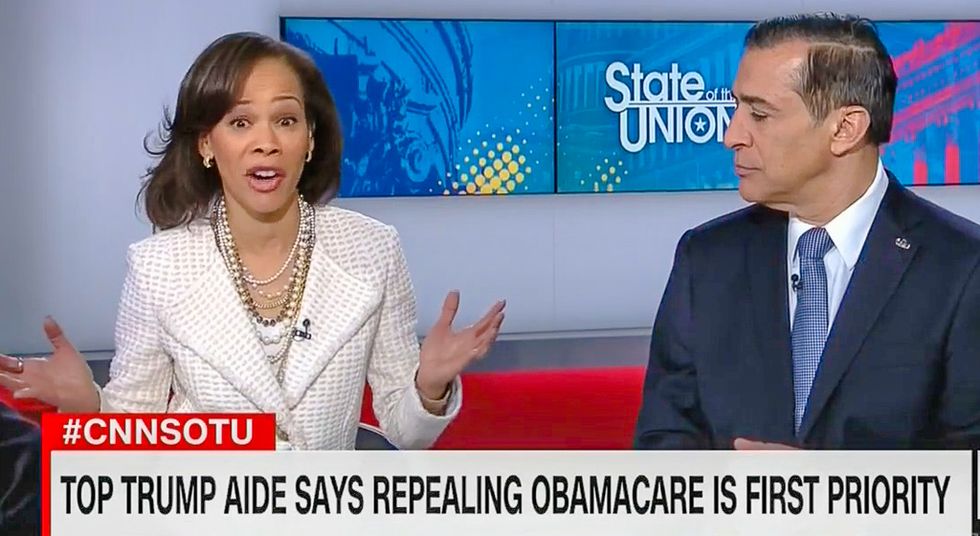 Rep. Darrell Issa (R-CA) asserted on Sunday that part of the solution for replacing President Barack Obama's health care law is to give patients fewer rights when suing doctors for malpractice.

During a panel discussion on CNN's State of the Union, Delaware Democratic Representative-elect Lisa Blunt Rochester pointed out that many of her constituents relied on the Affordable Care Act.

"That was a landmark I will always remember," she said of the health care reform law. "That was sort of like seeing an FDR thing in my own lifetime."

"I talked to a lot of people in my state," Blunt Rochester explained. "And everybody agreed that no law is perfect. But to the extent that we've touched every single American, everything from dealing with pre-existing conditions to discriminating against women for your coverage to your children who are 26 years or under being able to covered, there are so many good things. And what I would hope is that we would come together and say, 'Okay, what are things that we can agree on?'"

"There are parts to this that you can't just pull apart. It's not that simple."

Rep. Marsha Blackburn (R-TN) argued for a "phase in, phase out" approach to repealing the health care law.

"That way, you're not going to have people falling through the gap," Blackburn insisted "The goal is to make certain that everyone has access to affordable heath care. And then as you phase out, let's say the insurance [mandate] components, Title I of the Obamacare bill. And you set that up to phase out, so you get rid of the mandate, you get rid of the excise tax, you allow portability and you pass legislation of across-state-line health insurance and open up the insurance marketplace."

Issa said that he was keen to reduce or eliminate federal subsidies for health care.

"Look at the cost drivers," Issa opined. "Sen. Feinstein, the senior senator from my state, has for a long time championed various forms of tort reform -- this is a Democrat. Tort reform that will help stop the kind of excess medicine that drives up the cost of health care."

Although CNN host Jake Tapper tried to end the segment there, Blunt Rochester pushed back against Issa's solution.

"I hope that we will come up with the solutions before we try to get rid of something that will impact all Americans," she remarked. "I think it would be malpractice, pun intended."

A 2014 study published in the Journal of the American Medical Association found that Issa's so-called "excess medicine" accounts for no more than 2% to 3% of health care costs in the U.S.