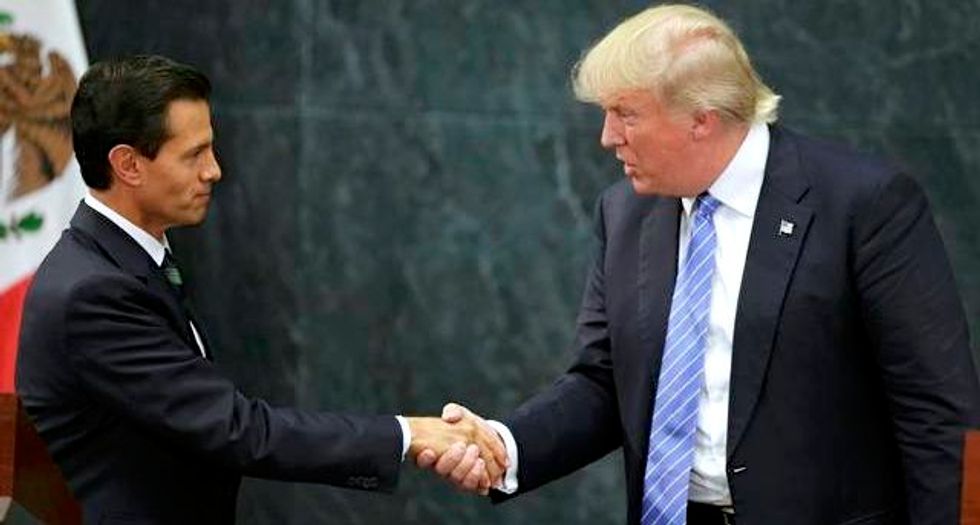 A leading contender for the Mexican presidency urged his government to lodge a lawsuit against U.S. President Donald Trump at the United Nations for the wall he plans to build on the border with Mexico to keep out illegal immigrants.

Speaking as Trump gave orders to start work on the wall along the 2,000-mile (3,200-km) border with Mexico, two-time presidential runner-up and leftist opposition leader Andres Manuel Lopez Obrador said the announcement was an insult to his country.

"I respectfully suggest that the government of Mexico presents a lawsuit at the United Nations against the U.S. government for violation of human rights and racial discrimination," Lopez Obrador told a crowd of supporters north of Mexico City.

President Enrique Pena Nieto said later on Wednesday in a recorded message that he "regrets and disapproves" of Trump's order on the border wall.

"Far from uniting us, it divides us," said Pena Nieto. "Mexico does not believe in walls."

In the message, the president did not confirm his participation in a White House summit next Tuesday with Trump. However, he said he would consult with top aides who held talks with senior White House advisors in Washington on Wednesday before deciding his next moves.

A former mayor of the capital, Lopez Obrador has led several early opinion polls ahead of the July 2018 election, and last week he announced plans for a tour of major U.S. cities in February to drum up support among Mexican-Americans.

Nicknamed AMLO for his initials, Lopez Obrador has urged Mexicans to resist the policies of Trump, who stirred up widespread anger with a presidential campaign targeting Mexican migrants and laced with threats against the country's economy.

His approval ratings are at the lowest level of any Mexican president in years, and Trump's order on Wednesday to begin construction of the wall the very day two Mexican ministers began talks with his administration sparked anger in Mexico.

Pena Nieto and Trump are due to hold talks on Jan. 31 and he faced opposition calls on Wednesday to cancel his meeting.

Trump vowed to build the wall right at the start of his presidential campaign in June 2015, when he accused Mexico of sending rapists and drug runners over the border.

The American's threats to tear up a joint trade deal and impose hefty border taxes on Mexican goods have also battered the peso. But his comments on Wednesday that he wanted to see a strong Mexican economy lifted the currency to a three-week high.

The 63-year-old Lopez Obrador told his supporters that Pena Nieto should defend Mexicans when the two meet.

"Go and fight for liberty, represent our people with dignity and all human beings who dream of a just world," he said. "Defend the migrant Mexican workers, long live the immigrants!"