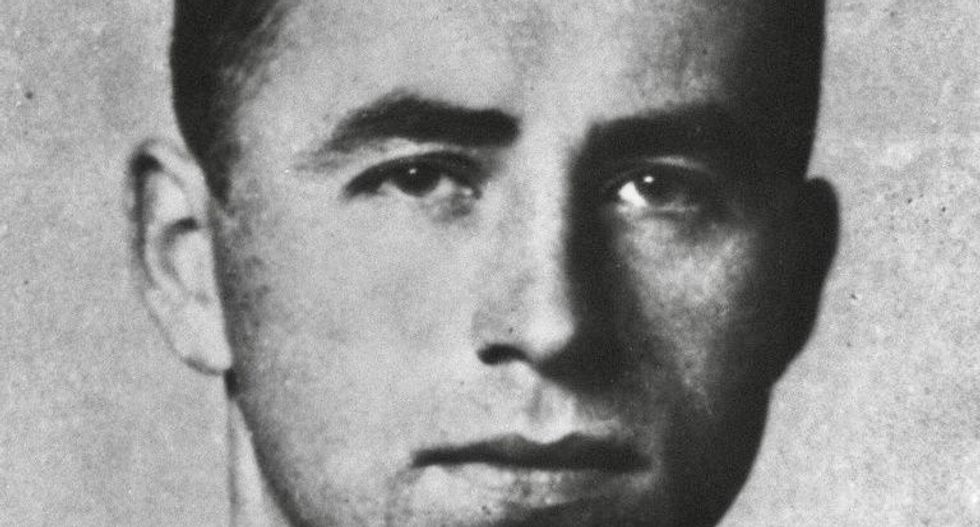 Nazi war criminal Alois Brunner, responsible for the deaths of an estimated 130,000 Jews, died in 2001 at the age of 89, locked up in a squalid Damascus basement, a French magazine reported Wednesday.

Its investigation -- described as "highly credible" by veteran Nazi-hunter Serge Klarsfeld -- aimed at discovering the fate of one of the most notorious figures of the Holocaust.

Three ex-members of the Syrian secret service interviewed by the magazine XXI said Adolf Eichmann's former assistant spent his last years in miserable conditions underneath an apartment block in the Syrian capital.

The Austrian-born SS commander was in charge of the Drancy camp north of Paris from which Jews in occupied France were sent to the gas chambers.

He remained to the end an unrepentant Nazi and anti-Semite, the sources told XXI.

One of his guards said Brunner, who went by the name of Abu Hussein, "suffered and cried a lot in his final years, everyone heard him".

The man, identified only as Omar, said he "couldn't even wash".

All he had to eat were "army rations -- awful stuff -- and an egg or a potato. He had to choose one or the other."

The circumstances of Brunner's final years have remained an enigma for decades.

The Simon Wiesenthal Centre in Vienna, which tracks down former Nazis, had declared that he had died in Damascus in 2010.

Klarsfeld, a prominent lawyer and historian, flew to Syria with his wife and fellow investigator Beate in 1982 to urge the Assad regime to expel him.

Klarsfeld's father was arrested in Nice in September 1943 in an SS roundup led by Brunner. He later died in Auschwitz.

"We are satisfied to learn that he lived badly rather than well," Klarsfeld told AFP.

"XXI's investigation is highly credible. They have questioned someone who knew him at close quarters," he added.

Eichmann, one of the architects of the so-called Final Solution who was hanged in Israel in 1962, called Brunner his "right-hand man".

Brunner slipped through the Allies' hands at the end of the war.

He left Germany for Egypt in 1953 with a passport in the name of Georg Fischer.

He worked for a time running guns to the Algerian independence movement, the FLN, before moving to Syria the following year.

Sheltered in Damascus, he became an advisor to the Syria secret police, allegedly passing on torture and interrogation methods developed by the Nazis.

But the Israeli intelligence services were quickly on his trail.

In fact, he lost an eye in that attack and four fingers in another parcel bomb in 1981, although the Syrian authorities continued to deny his existence.

He was convicted of war crimes by French courts in his absence in 1954, when he was sentenced to death.

In 2001, another French trial, which for the first time included the specific charge of arresting and deporting hundreds of orphans, sentenced him to life imprisonment. The death sentence had been abolished in France in 1981.

According to XXI, Brunner was practically under house arrest in his apartment in the diplomatic quarter of Damascus from 1989.

It said at the end of the 1990s he was moved for "security reasons" to the basement, and he was confined there until his death.

One of the most puzzling aspects of the story -- for which investigators as yet have no answer -- is why having sheltered him for nearly half a century, the Syrian regime decided to get rid of him in such a torturously slow manner.

"Once he was in the room, the door was closed and never opened again," his former guard Omar told the magazine.

He claimed Brunner was buried secretly in accordance with Muslim rites in the city's Al-Affif cemetery in December 2001.

"In a dictatorship like Syria, he was untouchable as long as the dictator didn't want rid of him," said Klarsfeld.

"Until the end he kept his hatred of Jews intact, as well as his faith in National Socialism," he added. "He was someone who hated France as much as he hated Jews."

Efraim Zuroff, who heads the the Wiesenthal Centre's Jerusalem office, told AFP that they got their information about Brunner's death in 2010 from a German intelligence source.

"I would like to believe it (that he died in terrible conditions)... frankly I can't think of a person who deserved it more. But I just don't know."

In a short telephone interview in 1987, Brunner is alleged to have told the Chicago Sun-Times that he didn't regret his part in the Holocaust.

"All of them deserved to die because they were the devil's agents and human garbage. I have no regrets and I would do it again."