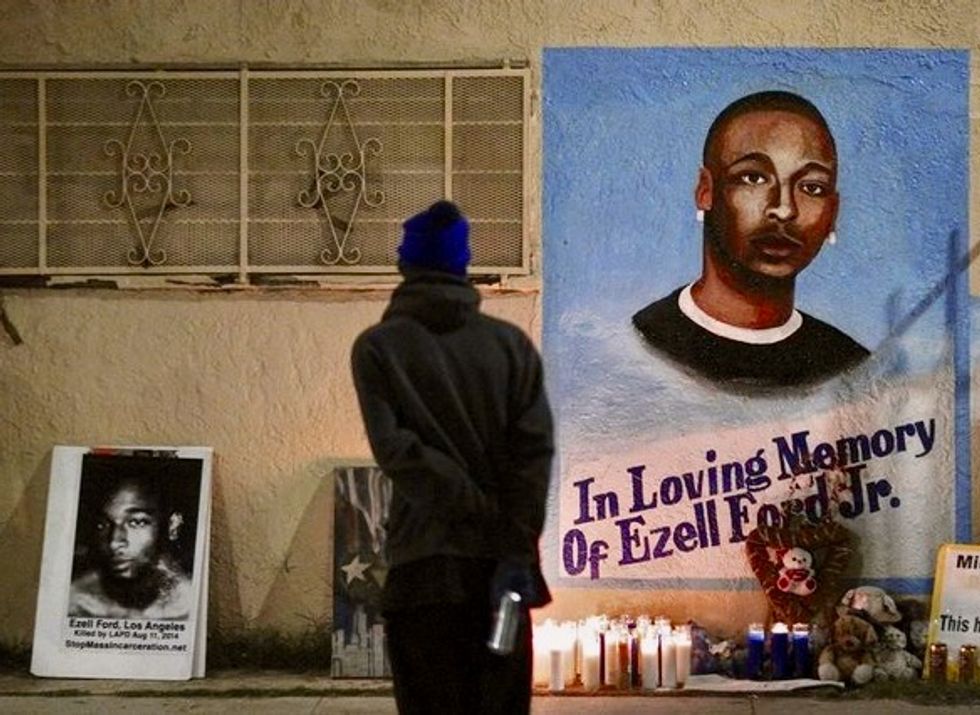 FILE PHOTO - A man stands near a mural for Ezell Ford after the Los Angeles County Coroner released an autopsy report on the LAPD's shooting of Ford in Los Angeles, California December 29, 2014. REUTERS/Jonathan Alcorn

Two Los Angeles police officers who fatally shot an unarmed black man described by his lawyer as mentally challenged will face no criminal charges over the 2014 killing, the district attorney said on Tuesday, calling their actions "legally justified."

The killing of 25-year-old Ezell Ford was one of many shootings of unarmed black men by U.S. law enforcement that triggered national protests and fueled a renewed civil rights movement known as Black Lives Matter.

As Wampler tried to apprehend Ford, the two men scuffled and ended up on the ground with Ford reaching for the officer's gun, according to the report.

Villegas then shot Ford twice, the report said, while Wampler pulled out a backup weapon, reached around Ford's back, and also shot him.

"Although the loss of Mr. Ford's life is tragic, we believe the officers' actions were legally justified and the evidence supports our decision," Lacey said in a statement.

The family's attorney, Steve Lerman, said that while Lacey's decision was expected, it was disappointing.

"It's politics as usual," said Lerman, who represented motorist Rodney King, who sued the Los Angeles Police Department after he was beaten by officers in 1991 in an attack that was filmed by a witness and broadcast around the world.

"It's very discouraging. Unless criminal penalties are imposed on officers who commit homicidal acts, then there is no justice for anybody, whether it's black, white, brown or other," the lawyer said in a phone interview.

Lerman, who said Ford suffered from schizophrenia and manic depression and had the "thinking pattern of a child," said he had been in settlement negotiations with the city over a $75 million lawsuit filed by Ford's family.

Lacey's decision not to file criminal charges came almost 20 months after the Los Angeles Police Commission ruled that Wampler violated several department policies in the killing. Villegas was cleared in the shooting.

Both officers were taken off street duties. That prompted the pair to sue the city last year, alleging the move was racially motivated. Villegas is Latino and Wampler is white.