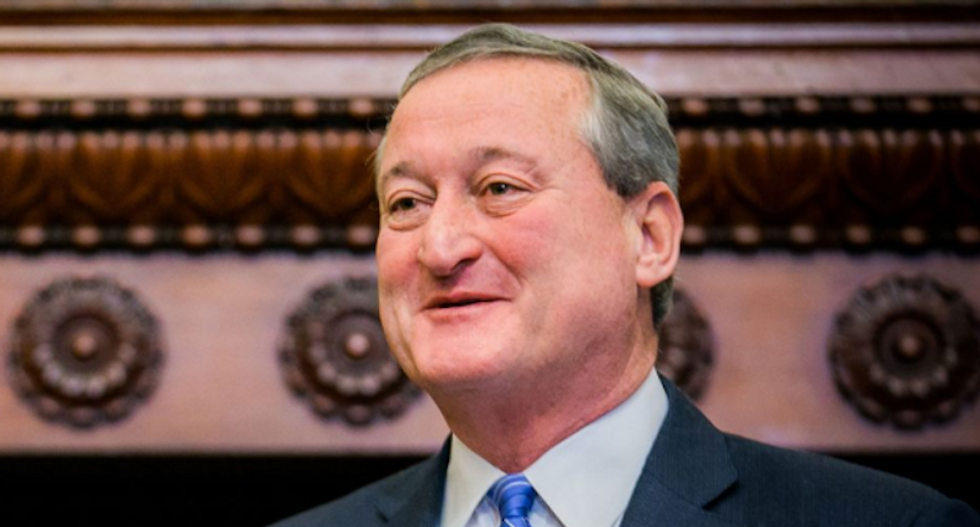 The mayor of Philadelphia has a message for President Donald Trump, who insists that the city's murder rate has increased. Trump has made a number of false claims since announcing his bid for president in 2015, and the lies are significantly worse now that he is in office — specifically because he now has policy-making power.

During the annual policy retreat for Congressional Republicans in Philadelphia this week, Trump claimed, "Here in Philadelphia, murder has been steady. I mean—just terribly increasing" He said, "Right now, too many families don’t feel secure. Just look at the 30 largest cities. In the last year alone, the murder rate has increased by an estimated 14 percent."

Year-end data from the Philadelphia police department shows otherwise, however. The murder rate in Philadelphia has not increased terribly, because in 2016, there were 277 homicides, which was down from the previous year's 280.

In 2014, there were 248 homicides, so in the last two years, there has been a minor increase, however the data also shows a decline in homicides over the last ten years, when the number was at 391 in 2007.

Philadelphia Mayor Jim Kenney addressed the president's comments in a written statement. It reads as follows:

President Trump’s false statements today were an insult to the men and women of the Philadelphia police force—the very same men and women who are working long hours today to ensure his safety. Our police officers have worked tirelessly and with great personal sacrifice to get Philadelphia’s crime rate down to its lowest point in forty years, while also successfully implementing reforms to strengthen police-community relations and uphold the rights of all our residents. Our homicides are, in fact, slowly declining, and while we are not satisfied with even our current numbers, we are handicapped by Republican refusal to enact any kind of common sense gun control and by their obsession with turning our police officers into ICE agents – which will prevent immigrants from coming forward to report crimes or provide critical witnesses statements that can put dangerous criminals behind bars.

Kenney has also stood firmly by the city remaining a sanctuary city for undocumented immigrants.