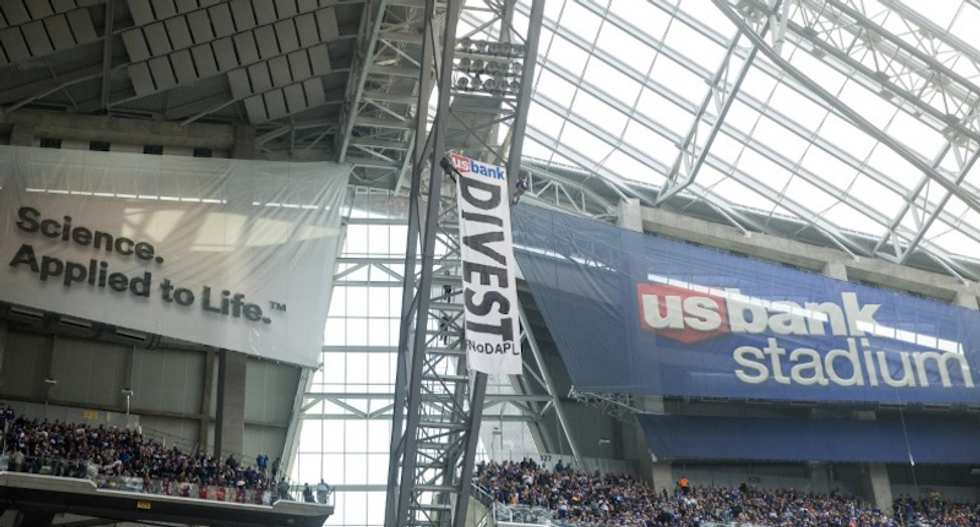 Two protestors rappel from the rafters with a banner against the Dakota Pipeline during the second quarter during a game between the Minnesota Vikings and Chicago Bears at U.S. Bank Stadium. (Mandatory Credit: Brace Hemmelgarn-USA TODAY Sports)

The banner urged Minneapolis-based U.S. Bank to divest from the $3.8 billion pipeline crossing four states. Construction in North Dakota prompted protests by Native Americans and environmentalists who say the project will harm water resources and sacred lands. The federal government ruled in December against that stretch of the project.

The protesters, a man and a woman, climbed down after the game ended and were arrested, police said in a statement. After undergoing medical evaluations, the pair were jailed on burglary and trespassing charges, and another woman was issued a trespass notice and released, the statement said.

The protesters climbed to the top of the stadium and hung a banner reading: "DIVEST" in big letters as well as "#NoDAPL," according to media images.

Play was not interrupted during the game, won by the Vikings 38-10, but police said a section of seats below the banner was cleared as a precaution.

Five demonstrators were arrested last week in the first protests since the federal government decided against the project.

Opposition to the pipeline has been backed by military veterans, celebrities and actors, including Mark Ruffalo, Shailene Woodley and Susan Sarandon.

Energy Transfer Partners LP, which is building the pipeline, has gone to federal court for a permit to finish the job. It has said it is committed to seeing the project completed without rerouting the line.

The company has said the 1,172-mile (1,885-km) pipeline, which is nearly finished, would be a more efficient and safer means to transport oil from the Bakken shale of North Dakota.