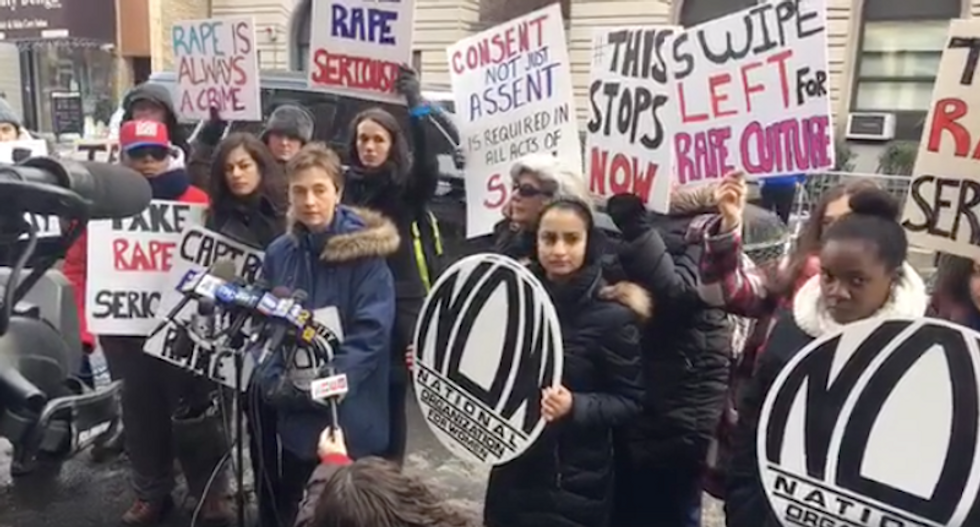 A group of women associated with the National Organization for Women gathered outside of New York's 94th Precinct stationhouse on Tuesday to demand that the NYPD reopen a series of unresolved acquaintance-rape cases, DNAinfo New York reports.

Last week, the outlet reported a 62 percent increase in sexual assault in the city's Greenpoint neighborhood in Brooklyn over the last year, the majority of which did not result in any arrests.

The NYPD reported 13 rapes and attempted rapes in Greenpoint, ten of which remain unsolved because the majority of the cases involved a perpetrator who was an "acquaintance" of the victim.

NYPD's Captain Peter Rose, who heads the 94th Precinct told DNAinfo, "It really becomes a balancing act for the investigators. Some of them were Tinder, some of them were hookup sites, some of them were actually coworkers. It's not a trend that we're too worried about because out of 13 [sex attacks], only two were true stranger rapes." Rose apologized for his remarks on Monday afternoon in a statement made public on his Twitter account.

Jane Manning, NOW's director of advocacy said, "It's good that [Rose] apologized, but the apology doesn't fix the problem." Members of NOW rallied in response and urged NYPD Commissioner James O'Neill to meet with them to discuss how these cases were handled across the department.

The group also wants to learn whether the issue was specific to the 94th Precinct or if there is city-wide data regarding arrest rates in acquaintance-rape cases. "[The commissioner is] saying a lot of the right things, but his message is not filtering down to everyday practice by officers in every precinct," Manning said.

Manning added, "We see way too many cases in which victims of acquaintance rape are met with hostility and disbelief from the very beginning, even when the evidence supports their account."

Demonstrators showed up outside the 94th Precinct on Tuesday with signs that read "Swipe Left for RAPE CULTURE," "A RAPE IS A RAPE IS A RAPE," and "Take rape seriously."

See below for video of Tuesday's demonstration.